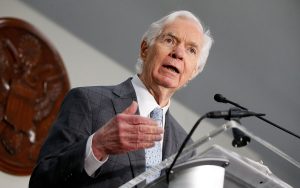 Cochran, 80, who has been in failing health, announced he will be retiring mid-term on April 1, 2018, following the completion of the 2018 appropriations cycle.

Governor Phil Bryant (R) will call a special election for the remainder of Cochran's term, to be held November 6th, coinciding with the re-election of the Mississippi's junior Senator, Roger Wicker (R).

Bryant will appoint a still-to-be determined interim Senator to fill the seat until November, and the winner of that election will run for re-election for a full six-year term in 2020.

The Mississippi Senate seat, which Cochran has held since 1978, is considered solidly Republican.

With the special elections in Cochran's seat and in Minnesota, to replace Senator Al Franken (D) who resigned in December, there are now a total of 35 of the 100 US Senate seats up for election November 6, 2018.

Although most of the Democrats are favored to win re-election, and the mid-term advantage of the party outside the White House gives Dems hope of taking control of the US Senate.  Nevertheless, the challenge of defending 26 seats is daunting.

Democratic incumbents in Indiana, Missouri, Montana, North Dakota and West Virginia, where Trump won in 2016 by double digits, are most vulnerable.

The GOP's greatest challenge will be in defending the open seats in Arizona and Tennessee, and Heller's re-election in Nevada.

US Senate Elections in 2018
Ratings based on review of The Cook Political Report, Sabato's Crystal Ball and DemList' final call.

January 19, 2017 Today is the final full day of the Obama Presidency, and the end of an eight-year journey that includes historic gains for all Americans, including: Legalization of same-sex...

May 15, 2017 Cyber warfare, via hacking or attacking, has become an increasing part of our reality in a world where close to 50% of the population is online. On Friday, a malicious malware or...

The State of the Republican Race: Indiana has no notable footmarks in the history of presidential elections, but that changed yesterday.