Russia's war on Ukraine is now in its twelfth day, with 100% of Russia's 170,000 forces that were amassed along the border now in Ukraine.

The Ground War
Russian troops ramped up their shelling of major Ukrainian cities this weekend, while poised at the doorstep of its capital city of Kyiv.

In addition to its original invasion into the Donbas Region, which is now under the control of Russian separatists, Russia has overtaken the shipbuilding city of Kherson, opening up access to Ukraine’s southern coastline along the Black Sea for invading Russian forces.

Russian troops also took over the Zaporizhzhya Nuclear Power Plant in Enerdohar in southeastern Ukraine on Friday after bombing the site, hitting a training center, but not any of the six reactors.

A cease-fire negotiated Saturday to open up safe-passage corridors and delivery of humanitarian supplies collapsed within hours as Russian military continued to pound residential areas in the battered cities of Kyiv, Mariupol, Kharkiv and Sumy. An estimated 625 missiles have been launched.

Attempts to evacuate civilians from Mariupol failed as Russian soldiers continued to shell the besieged port city which is strategically located between the Donbas region and the Crimean Peninsula, which Russia illegally annexed in 2014. 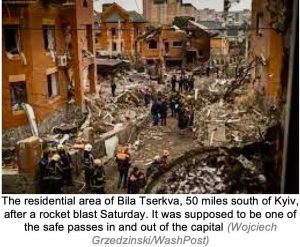 The capital city of Kyiv, Russia’s most important territorial and political target, has continued to hold its own, with Ukrainian President Volodymyr Zelensky addressing the nation daily from secure locations.

Russian troops are firing rockets into the city from their position northwest of the city where a 40-mile long column of Russian armored and military vehicles are lined up.

The Victims
The number of Ukrainians forced to flee from their country has reached 1.7 million, most heading west to Lviv and then on to Poland or other destinations in Europe. Other countries taking in large numbers of refugees include Hungary, Slovakia, Moldova and Romania.

Official estimates are that 406 Ukrainian citizens have lost their lives to the conflict, and over 1,700 injured, but those numbers are considered outdated and far below the real casualties. Ukraine reports that 11,000 Russian troops have been killed and Russia claims 2,870 Ukrainian troops killed, although both countries dispute the figures.

Negotiating War
Russia and Ukraine returned to the negotiating table for a third time Monday after previous talks failed to yield a breakthrough. 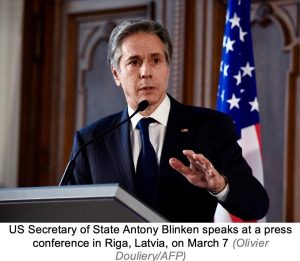 The Kremlin announced in advance their demands for stopping the attacks, which included Ukraine halting its military activity, changing its Constitution to include neutrality so it can't join the EU or NATO, recognizing Crimea as Russian territory and recognizing the independence for the separatist regions of Donetsk and Lugansk.

Sanctioning War
Since the initial invasion of Ukraine, the United States and 34 countries have imposed sweeping and unprecedented economic sanctions on Russia, along with weapons and humanitarian aid to Ukraine.

Among recent developments:
On Saturday, in an online call with the US Congress, Zelensky implored lawmakers to send additional direct aid to Ukraine, ban oil imports from Moscow, and establish a no-fly zone.

The US security assistance package for Ukraine, described by one Defense Department official as "the largest presidential drawdown package in history," is valued at $350 million.

US Secretary of State Antony Blinken, who is in Latvia for a NATO meeting on the Russian military build-up, announced this morning that 70% of that defense support “is already in the hands of Ukrainians, being used very effectively against Russian aggression.”

This afternoon, top Republicans and Democrats in Congress announced a deal on bipartisan legislation that bans the import of Russian oil and other energy products -- as well as suspending normal trade relations with Russia.

The no-fly zone, to be very clear about what that involves is, that means that if Russian planes violate the zone that's declared, we shoot them down. And that runs the considerable risk of creating a direct conflict between our countries and Russia and thus a wider war, which is in no one's interest, including the Ukrainian people."