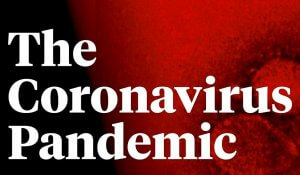 The United States currently leads the world in confirmed victims of the deadly coronavirus pandemic, with over 772,000 reported cases and the loss of close to 42,000 Americans lives -- a number that has doubled in the last week.

As individual states struggle to "flatten the curve" of the escalating COVID-19 numbers, citizens are receiving mixed messages from the White House and the President, who is anxious to open up a devastated economy.

In last Monday's daily press briefing, speaking specifically to his authority to lift social distancing measures, President Trump said, "When somebody's the President of the United States, the authority is total. And that's the way it's got to be."

Governors and legal experts were quick to correct the statement, noting that the US Constitution grants Trump no such powers, and, in fact, the 10th Amendment delegates 'police powers' to the states to regulate behavior during public-health crises. 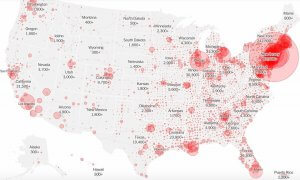 The map shows the known locations of coronavirus cases by county. Circles sized by the number of people who have tested positive. CLICK for more info on your state (Source: New York Times)

Trump has attempted to blame others for his delayed response to the coronavirus outbreak, from promoting a theory that the "Chinese virus" originated in a laboratory and blaming the Obama administration and individual Democratic governors, to attacking the World Health Organization (WHO), the United Nations' global health body. 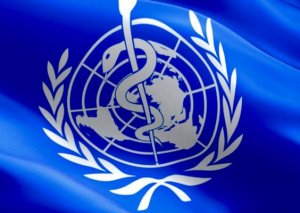 Trumps cuts to WHO budget "Crimes Against Humanity"

Last Tuesday, Trump announced that an estimated $400 million in US funding for the WHO would be withheld for 60-90 days, to assess the organization's role "in severely mismanaging and covering up the spread of the coronavirus."

The move was immediately assailed as "crimes against humanity" by some world health experts and United Nations Secretary-General Antonio Guterres said, now is "not the time" to cut funding and that the WHO was "absolutely critical to the world's efforts to win the war against Covid-19."

In fact, according to reporting by the Washington Post, more than a dozen US public health experts working at WHO's Geneva headquarters, including from the Centers for Disease Control and Prevention (CDC), started transmitting real-time information on the potentially "cataclysmic" coronavirus as early as last November to senior Trump-appointed health officials. Trump also ignored early warnings from US intelligence agencies, the Army, his health secretary and top trade adviser.

Politics and Protests
Last Thursday, President Trump rolled out a three-stage plan for re-opening businesses and aspects of everyday life in the states by May 1st, despite continued warnings by health experts that widespread testing is still necessary before Americans can safely start returning to their normal lives. Nationwide only 1% of the population has been tested. 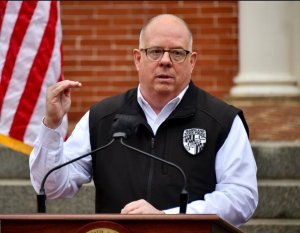 Trump said that as many as 29 states could reopen soon, and that current testing "is fully sufficient to begin opening up the country totally." He pushed the responsibility of testing, however, back to Governors as "a local issue."

In response, Republican Governor and Chair of the bipartisan National Governor's Association Larry Hogan (MD) said that Trump trying "to push this off to say that the governors have plenty of testing and they should just get to work on testing, somehow we are not doing our job -- is just absolutely false."

Lack of testing is the nation's biggest problem, said Hogan, adding "Every governor in America has been pushing and fighting and clawing to get more tests not only from the federal government but from every private lab in America and from all across the world and we continue to do so."

On Friday, in response to state protests against Democratic Governors who had imposed strict social distancing, President Trump expressed support for the protestors, tweeting "LIBERATE MICHIGAN!" and "LIBERATE MINNESOTA!" 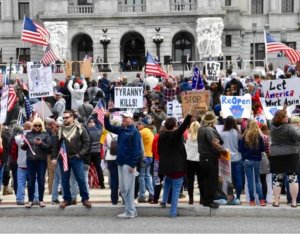 To protestors in Virginia, where the Democratic Governor and legislature has pushed for strict gun control measures, Trump tweeted: "LIBERATE VIRGINIA, and save your great 2nd Amendment. It is under siege!"

October 3, 2022  In one very riled-up room in the Mayflower Hotel in Washington, DC last Friday, some 500 women leaders and supporters let loose about their critical role in the elections and the...

DemDaily: Connecting You to The Party

Join DemList and WNDC in Welcoming Chairman Tom Perez and the Officers of the Democratic National Committee as we celebrate a new era of leadership for the Democratic Party.