Over 69.5 million Americans have cast their ballots early, already exceeding half the number of votes counted during the entire 2016 presidential election.

With an unprecedented number of states in play, the outcome of the presidential election is still undetermined, but the path to victory for Joe Biden appears to be expanding as the historically contentious campaign nears its end.

Status of the States
In 2016, Trump won 30 states (and Maine's 2nd Congressional District) for a total of 306 electoral votes. 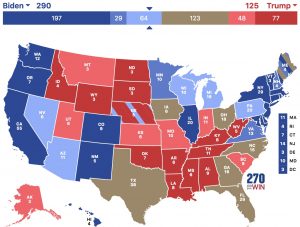 Based on our analysis of each state and top political ratings, Donald Trump now has just twenty states in the "Likely" or "Solidly" Safe category, for a total of 125 electoral votes.

Comparatively, Joe Biden is favored in 24 states, including six "leaning" his way, for a total of 290 electoral votes -- putting him 20 past the 270 to win the election.

Trump will need to win all, and peel away at least two of the leaning-Democratic battlegrounds states like Michigan, Pennsylvania or Wisconsin, to overcome Biden.

Competitive Senate races are a critical factor in at least six of the Toss-Up or Leaning states, which could influence the outcome at the top of the ticket. 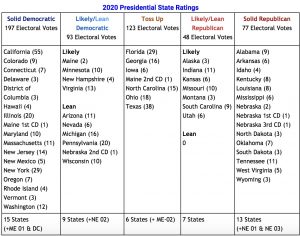 Note: Maine and Nebraska differ from other states in that each awards two electoral votes to the statewide winner and one electoral vote to the winner in each congressional district.

While our forecast is positive, no vote can be taken for granted.
Go to DemList's 2020 Election Protection Connection to check the laws and voter resources in your state!

Ballot initiatives have become an integral part of the electoral process

DemDaily: Off to the Races!

The 142nd running of the Kentucky Derby is this Saturday, May 7th, providing a welcome reprieve from the 24 hour presidential “horse race.”

October 25, 2022 With just two weeks until the 2022 midterm elections, and with early voting underway in 35 states, candidates are hoping to sway undecided voters with their final debate...