Posted May 11, 2020 | by KimS | in Coronavirus, DemDaily, Resource, Trump Administration

The country is slowly opening up after the first wave of the coronavirus pandemic, with stay-at-home or shelter-in-place orders being lifted at different rates on a state-by-state basis, despite warnings of health experts say that a second, if not a third wave, is ahead of us.

The United States, now "officially" more than two months into the crisis, and over five months since the Trump administration was first warned of the pending pandemic, is still without a national testing or quarantine program. 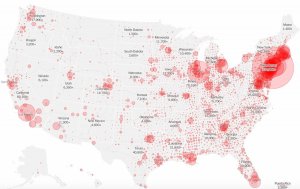 Even as cases of infection in the US, now at 1,352,600 and deaths at 81,400, rise, states continue to lift restrictions, under pressure of a devastated economy with now 43.2 Americans out of work or working reduced hours.

Over two-thirds of state Governors have lifted stay-at-home orders and opened businesses at some level, most with public health restrictions such as requiring workers to wear masks and social distancing, but enforcement varies widely. In some cases, despite statewide opening, local counties have enforced their own stricter orders.

Some states, like Connecticut, Delaware, Massachusetts, New York and New Jersey, all slated to open in the next three weeks, are coordinating their efforts. Other states in the Midwest and West Coast have also formed coalitions to usher in a regional recovery.

Still others, like California, which was the first state to order all residents to stay home, as well as Washington and Oregon, remain on near-full lockdown.

To help our readers, who hail from every state, we have provided an update on the status of each state as to their stay-at-home orders and what aspects of daily life have been reopened, or about to be reopened. Categories may include all or some, but where limited to one component of each, it is noted.

Status of the States Reopening

A total of 48 states and DC have ordered or recommended school closures through end of the academic year. Regardless, children in at least nine states and DC have now died of COVID-19 or what appears to be a rare illness linked to the virus called "pediatric multisystem inflammatory syndrome."

All DemList charts are created uniquely with research from various identified sources.

January 13, 2021 At 4:37pm today, one week after the deadly assault on the US Capitol, the United States House of Representatives impeached President Donald J. Trump for “high Crimes and...