While the presidential election dominates the news, taking control of the US Senate is almost, if not as, critical to Democratic hopes of passing significant legislation beyond 2020.

THE SENATE
Current Count: 47 Democrats* to 53 Republicans
*Includes two Independents who caucus with the Democrats

Most are considered "safe" or "likely" Democrat, with one notable exception.

Alabama
The Alabama Senate race, in a state which Donald Trump won with 62.1%, has from the outset been in the "toss up" category.

The dynamics of the contest changed considerably, however, on November 7th when former Senator and US Attorney General Jeff Sessions (R) announced he would challenge incumbent Doug Jones (D) for his old Senate seat, one that Sessions previously held for twenty years.

Sessions relinquished the seat in February, 2017 to become Trump's US Attorney General, only to later be forced out in November, 2018.

Moore, also an accused sexual predator, is one of seven candidates, along with Sessions, vying for the GOP nomination March 3, 2020. If no one candidate secures 50%+ of the primary vote, then the top two will go to a runoff on March 31st. 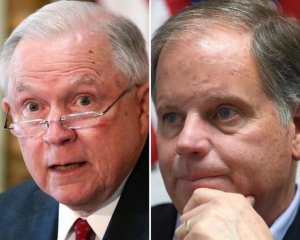 Michigan
Also of concern to Democrats is the reelection of first term Democrat Gary Peters, who succeeded Senator Carl Levin in 2014.

James, who would be the state's first African American US Senator, outraised Peters by $1 million in the final fundraising quarter of 2019.

With almost twice as many seats up, the GOP is facing a number of serious challenges, including at least four "toss ups." 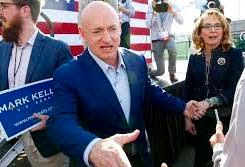 Arizona
In 2020, Arizona will hold a special election to elect the permanent successor to the late Senator John McCain (R), who passed away in August, 2018.

Interim US Senator Martha McSally, who ran unsuccessfully in 2018 against Kyrsten Sinema (D) for the seat vacated by retiring Senator Jeff Flake (R), must now defend the seat she has held since being appointed by the Governor in December, 2018.

McSally, who narrowly lost to Sinema, 47.6% to 50%, in the 2018 bid, is a former Congresswoman, US Airforce Colonel and combat veteran. Although a strong candidate, she is facing stiff general election opposition in former astronaut Mark Kelly.

Kelly is co-founder of Americans for Responsible Solutions, a nonprofit that advocates "commonsence gun laws," along with his wife, former Arizona Congresswoman Gabby Giffords, who served from 2007-2012 when she resigned following serious injury in a gun shooting. 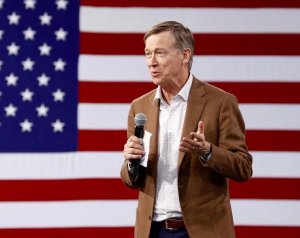 Colorado
First term Republican Cory Gardner is one of the Senate's most vulnerable incumbents.

A former US House member, Gardner unseated Democratic incumbent Mark Udall 48.2% to 46.3% to win his Senate seat in 2014, one of two Republicans that are now up in states won by Hillary Clinton (D) in 2016.

Until Barack Obama won the state in 2008, Colorado had voted Republican in every US Presidential Election since 1964, but the state has continued to veer Democratic, and has elected a Democratic governor for 22 of the past 30 years. Colorado's senior Senator is Democrat Michael Bennet, now in his third term, and running for president.

Gardner was already high on the endangered list when former Colorado Governor John Hickenlooper dropped his presidential bid in August to challenge Gardner.

Although at least nine Democrats are running in the primary, many of the higher-profile names who were poised to jump in the primary contest are now backing Hickenlooper. Former State House Speaker Andrew Romanoff, who was a candidate for US Senate in 2010, is among those still in the race.

Although no recent polling is available, an August 16-19, 2019 Emerson poll showed Hickenlooper leading Gardner 53% to 40%. 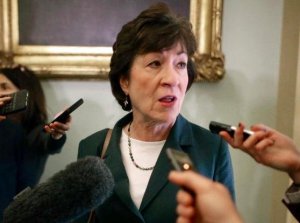 Maine's Susan Collins, one of two Republicans up in states won by Hillary Clinton in 2016 (Chip Somodevilla/Getty)

Maine
Maine's senior Senator is Susan Collins, a Republican who has been elected four times in a state which otherwise has voted Democrat in every presidential since 1992. Maine's junior Senator is Angus King, an Independent who caucuses with the Democrats.

Collins has long positioned herself as a moderate, and often pivotal vote on key legislation that borders along party lines. But with control of the Senate in play, Democrats are willing to wage a battle to flip the seat to their favor, and the frontrunner for their nomination is Maine State House Speaker Sara Gideon.

In what is adding up to be the most expensive contest in the state's history, analysts project over $50 million in ad spending.

The last published public survey was a June 24, 2019 Gravis poll, which gave Collins a 14% lead over Gideon -- but Collins has since been moved into the "toss up" category by most pundits.

North Carolina
First term incumbent Republican Thom Tillis, who unseated Democratic Senator Kay Hagan in 2014, has moved up on the endangered list, with an approval rating among North Carolina voters at 22%, and only 40% among Republican voters. 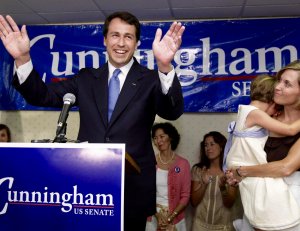 In what may end up being a referendum on Trump, Tillis' numbers seem to reflect the President's increasing lack ofpopularity in the state. According to an October, 2019 Public Policy Polling survey, Trump, who won North Carolina in 2016 by 4% points, rates a 51% disapproval rating among voters.