Now less than four months out from the November 8, 2022 midterm elections, there are at least nine US Senate seats that will determine the balance of power in the upper chamber.

See our rundown on the first six "Toss Up" contests in Arizona, Georgia, Nevada, Ohio, Pennsylvania and Wisconsin, in DemDaily: Status of The Senate: Races and Ratings  (7/7/22).

The next three, however, are on the edge of moving up or down the latter in Democrats' hope to maintain, if not expand, their margin of control in the upper chamber. 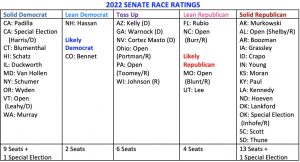 In the country's largest battleground state, Republican Senator Marco Rubio is facing his most serious reelection challenge since being elected in 2010.

The Cuban-American, 51, was briefly a candidate for the 2016 Republican presidential nomination before reverting to reelection for his Senate seat, successfully fending off a challenge by Democratic nominee Patrick Murphy, 52% to 44.3%.

Congresswoman Val Demings has all but cleared what was once a field of 12 Democratic contenders, now down to four.

Demings, 65, was first elected to represent the 10th Congressional District in 2016 and was reelected in 2020 with 63.6% in the Orlando-based seat. She previously spent 27 years with the Orlando Police Department, including the last four as Chief, the first woman to hold the position. 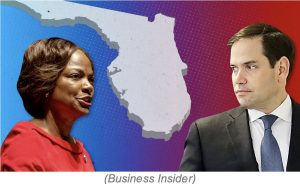 A member of both the House Intelligence and Judiciary Committees, Demings gained national recognition as one of the House managers in former President Donald Trump's first impeachment trial. She was also on Joe Biden's shortlist as a potential vice-presidential pick in 2020.

Despite Demings' trailblazing resume, Florida has been trending Republican, dealing blows to Democrats over the last three election cycles and putting into question its swing-state status. 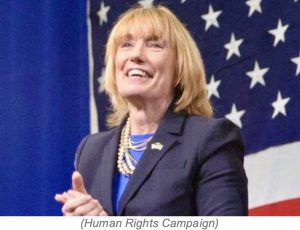 The reelection campaign of Democratic Senator Maggie Hassan, who unseated first-term Republican Senator Kelly Ayotte in 2016 by less than 800 votes, is among the battleground contests of 2022.

Hassan, who served as Governor from 2013 to 2017, is only the second woman in American history to be elected both Governor and United States Senator, along with fellow New Hampshire Senator Jeanne Shaheen. She is unchallenged in the primary.

Hassan's chief Republican opponent is former US Army Special Forces Brigadier General Donald Bolduc, who has the endorsement of former GOP Senator Bob Smith (NH) and is leading a GOP field of 12 candidates. Bolduc was a candidate for the US Senate in 2020, coming in second with 42.30% to GOP nominee Corky Messner's 50.26%. Shaheen won the 2020 general election against Messner by 15 points.

While Bolduc had the clear lead, the same UNH survey showed Hassan is vulnerable against any of the top four GOP contenders named in the poll, coming within 6% of each at that point. 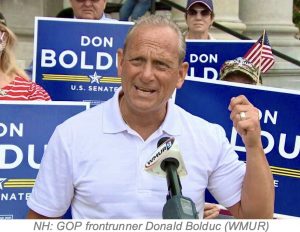 With no more recent GOP primary polling, the results of this month's second-quarter 2022 fundraising report, due out July 15th, will be a critical indicator of the strength of Bolduc's candidacy.

The open seat being vacated by retiring Republican Senator Richard Burr is poised to move into the toss-up category. 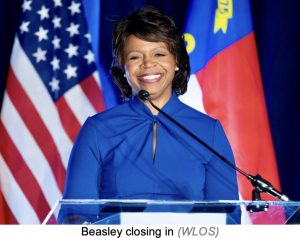 Colorado: The reelection of two-term incumbent and former presidential candidate Michael Bennet is drawing attention because of his general election opponent -- businessman and self-funder Joe O’Dea, who prevailed in the June 28 GOP primary with 55%.

Missouri: The Show-Me State's status will be determined largely by the outcome of the August 2 primary elections for the seat being vacated by retiring Republican Senator Roy Blunt.

If Greitens, who resigned his office in 2018 amid campaign finance improprieties and allegations of sexual assault, is the nominee, then the race becomes competitive for Democrats. Top contenders for that nomination are veteran and national security director of the American Economic Liberties Project Lucas Kunce, former nurse and daughter of beer magnate August Busch, Jr., and entrepreneur Spencer Toder.

The June 29 entry of former US Attorney for the Western District of Missouri John Wood, who is running as an independent (but would caucus with the Republicans) is also likely to shake up the race. Wood, who left his post as staff counsel for the January 6th Committee to launch his bid, has the support of former GOP Senator John Danforth (R-MO). 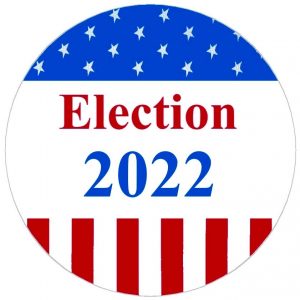 Utah
Two-term Republican Senator Mike Lee fended off two challengers with 62.3% of the vote in the June 28 primary election. This will be the first Senate election in Utah’s history where there is no official Democratic nominee, as the Utah Democratic Party chose to endorse Evan McMullin, an independent candidate.

McMullin, a former CIA operative and former policy director for the US House Republican Conference, left the Republican Party in 2016 after Donald Trump became the presumptive presidential nominee, and launched his own brief presidential campaign.

A May 24-June 15, 2022 survey conducted by Dan Jones & Associates for the Deseret News, University of Utah Hinckley Institute of Politics, had McMullin at 35% to Lee's 41%.