Now 27 days out from the November 8, 2022 midterm elections, future control of the US Senate will be determined by a handful of "toss up" contests.

Those include elections in Georgia, Nevada, Ohio, Pennsylvania and Wisconsin. We have also moved North Carolina into that category, while shifting Arizona into the "Lean Democratic" category.

While the GOP is defending a larger share of this year’s seats, the battle lines are evenly drawn in the most competitive elections.

With Democrats' razor-thin control of the split 50-50 Senate due to Vice President Kamala Harris' tie-breaking vote, any gain will bring them closer to future legislative victories.

To maintain control of the US Senate, Democrats must hang on to vulnerable seats in Arizona, Colorado, New Hampshire, Georgia, and Nevada.

Any loss may be offset by potential pick-ups in states such as Florida, Ohio, North Carolina, Pennsylvania and Wisconsin.

According to the Federal Elections Commission, a total of over $1 billion has been raised by Senate candidates running in 2022.

Democrats dominate the candidate fundraising game -- having outraised, or expected to have outraised, their Republican opponents in all top ten targeted seats as of the upcoming October 15th 3rd Quarter fundraising filing deadline.

GOP candidates, however, are reaping the rewards of support from outside groups by four to one over Democrats. Under federal finance law, outside groups can spend unlimited amounts supporting candidates as long as the outlays are not coordinated with campaigns.

According to an analysis by Reuters, dozens of conservative organizations, led by a fundraising group tied to Republican Senate leader Mitch McConnell, reported spending more than $104 million in September alone to help candidates in seven Senate races. 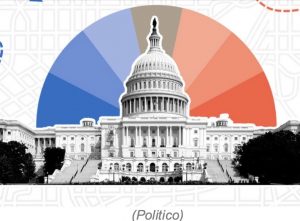 Democratic allies in the same races -- spread across Arizona, Georgia, North Carolina, New Hampshire, Nevada, Pennsylvania and Wisconsin -- reported spending about $23 million last month. Most of the expenditures are in the form of negative advertising.

While money may likely close the gap in many of these races, Democrats benefit from record job numbers, an increase in Biden's approval numbers, and undiminished anger among the electorate over the Supreme Court decision to overturn Roe v. Wade.

Regardless, there is still plenty of time for an October surprise in any given election.

Up Next: DemList's rundown on the top contenders and contests over the next week!