The battle for control of the United States Senate has taken on even greater significance as Americans are reminded that it is the Senate that determines the fate of the Supreme Court.

There are 35 of the 100 US Senate seats up for election November 3, 2020, including two special elections. Democrats are defending 12 seats, while the Republican Party is defending almost twice as many, with 23.

Based on our review of senate race ratings by the Cook Political Report, Sabato's Crystal Ball, Inside Elections, FiveThirtyEight and RealClearPolitics' polling compilations, Democrats are now favored in their quest for the White House, which is coming down to half a dozen primarily GOP toss up seats.

Only one Democratic incumbent, Senator Doug Jones of Alabama, is rated as a potential flip. 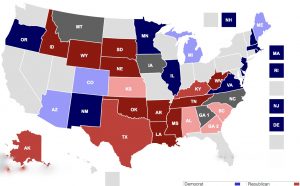 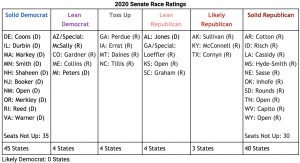 Related
DemDaily: The Status of Voting in Your State 9/8/20
DemDaily: The State of the Electoral College & Presidential Ratings 8/31/20
Go to the 2020 DemList Election Calendar for all Biden-Harris fundraising events!
Voting Information: IWillVote.com
DemList will keep you informed.