The United States Senate currently stands at 50 Democrats (including two Independents who caucus with the Democrats) to 50 Republicans. As Vice President Kamala Harris serves as the President of the Senate and has the tiebreaking vote, Democrats officially have control of the Senate. 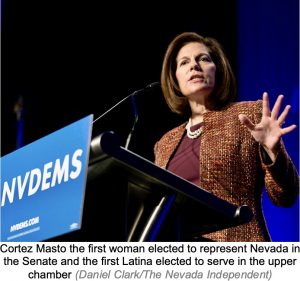 Cortez Masto, who is the first-ever Latina elected to the United States Senate and who served as Chair of the Democratic Senatorial Campaign Committee in the 2020 cycle, faces minor primary opposition.

In the battleground state that Biden won by just 2.4%, Cortez Masto's major Republican challenger is Adam Laxalt, who succeeded her as Attorney General in 2016 and was the 2018 GOP nominee for governor. Laxalt, who lost the 2018 governor's race by 4% to Democrat Steve Sisolak, is the son of former US Senator Pete Domenici (R-NM) and the grandson of former Nevada Governor and US Senator Paul Laxalt (R). 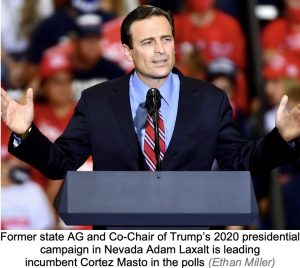 Cortez Masto entered 2022 with more than four times as much money on hand as the entire GOP field trying to unseat her, with a total of $17.4 million and $10.46 million cash on hand.

By comparison, Laxalt, who entered the race in August, had raised over $2.7 million with $1.69 million cash on hand. Laxalt's closest competitor, US Army veteran Sam Brown, who trailed Laxalt by over 35 points in recent primary polling, had raised just over $2 million and had $732,471 cash on hand. Brown has the backing of Nevada Republic Party Finance Chairman and Ahern Rentals CEO Don Ahern.

Of the five Democrats vying for the nomination, Lieutenant Governor John Fetterman has maintained his frontrunner status in the field, garnering 28% in a February 21-27, 2022 Franklin & Marshall College poll of likely voters. Congressman Conor Lamb (D-17) garnered 15%, followed by State Representative Malcolm Kenyatta with 2%, and other candidates 7% (MOE: ± 9.9%). With 50% undecided in the poll, however, there is still room for movement. 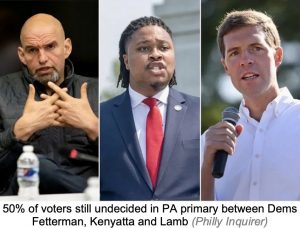 Despite Fetterman's frontrunner status, the self-proclaimed progressive has few endorsements compared to the more moderate Lamb, who has also amassed the lion's share of support from state legislators and local and state labor unions. Kenyatta's organizational support also far exceeds Fetterman's and includes the powerful AFSCME District Council #33 and nationally, SEIU and AFT.

The road to the Pennsylvania Republican nomination has been a rocky one, with several shakeups, including the November exit of Trump-endorsed candidate Sean Parnell following allegations of spousal and child abuse. 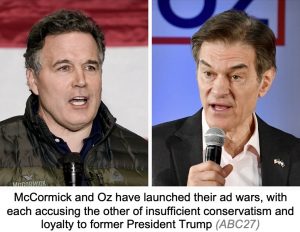 Numbers for McCormick will not be known until the 2022 first-quarter report is filed in mid-April, but as the former CEO of one of the world’s largest hedge funds, he is expected to invest heavily in his own candidacy. His campaign has reportedly already purchased $6.5 million in airtime. 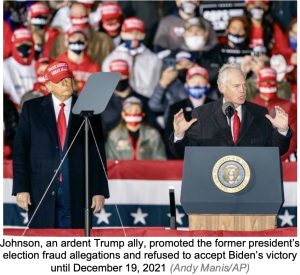 Senator Ron Johnson, among the GOP's most vulnerable incumbents, is the only Republican Senator facing reelection this year in a state that supported Democrat Joe Biden in the 2020 presidential race.

The race may be Democrat's best chance to flip a Senate seat, one that Johnson has held since he unseated Democratic Senator Russ Feingold in the 2010 midterm elections. A staunch Trump ally, Johnson was reelected in 2016 in a rematch with Feingold, winning 50.2% of the vote.

In a February 22-27, 2022 Marquette University poll, Johnson was viewed favorably by 33% of registered voters and unfavorably by 45%, with 21% saying they haven’t heard enough or don’t know. 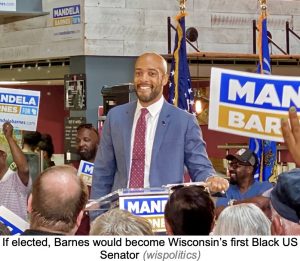 In the February Marquette poll, Barnes was supported by 23% of Democratic primary voters, Lasry by 13%, Nelson by 5%, Godlewski by 3%, and other candidates 5%, with still 48% undecided.

A more recent March 16-23, 2002 conducted by Impact Research for the Barnes campaign showed Barnes at 38%, Lasry at 17%, Godlewski at 9% and Nelson at 8%. Three percent of respondents opted for another candidate and 26% of primary voters were undecided (MOE: ± 4.6%).

Johnson, who did not announce his reelection bid until this January, had raised just $4.6 million as of December 31, 2021, with $2.46 million cash on hand.

February 15, 2018 17 people dead, 14 of them children. Yesterday’s tragic shooting at a Parkland, Florida High School was the 18th school shooting of 2018. The murders were among now...

DemDaily: The Bounce and the Backlash