The US Senate currently stands at 50 Democrats, including two Independents who caucus with the Democrats, to 50 Republicans. As Vice President, Kamala Harris serves as the President of the Senate and has the tiebreaking vote, Democrats officially have control of the Senate.

34 of the 100 US Senate seats up for election in 2022. Democrats are defending 14 seats, while the Republican Party is defending 20, including five open seats.

Now less than one year away from the 2022 midterm elections, the focus is on six Senate seats that are considered a "Toss Up" in Arizona, Georgia, Nevada, North Carolina, Pennsylvania and Wisconsin. 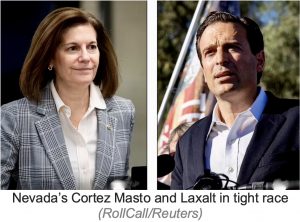 Cortez Masto, who is the first-ever Latina elected to the United States Senate, served as Chair of the Democratic Senatorial Campaign Committee in the 2020 cycle.

In the battleground state that Biden won by just 2.4%, Cortez Masto's major Republican challenger is Adam Laxalt, who succeeded her as Attorney General in 2016 and was the 2018 GOP nominee for governor.

Laxalt, who lost the 2018 governor's race by 4% to Democrat Steve Sisolak, is the son of former US Senator Pete Domenici (R-NM) and the grandson of former Nevada Governor and US Senator Paul Laxalt (R). He was also co-chair of Trump's Nevada campaign.

Laxalt's closest competitor, US Army veteran Sam Brown, has raised in total just over $1 million and had $656,00 cash on hand. Among those backing Brown is Nevada Republic Party Finance Chairman and Ahern Rentals CEO Don Ahern. 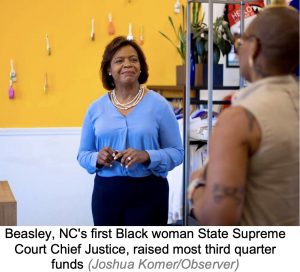 Leading the Democratic field is former public defender, judge and State Supreme Court Chief Justice Cheri Beasley, who has been endorsed by EMILY's List and the Congressional Black Caucus.

Beasley's closest competitor is veteran and State Senator Jeff Jackson, who entered the race four months prior to Beasley, and has raised $3 million total and $1.2 million cash on hand at the end of the third quarter. Beasley, however, topped third-quarter fundraising, pulling in $1.5 million to Jackson’s $900,00.

Beaufort Mayor Rett Newton raised $107,00, and the remaining Democratic contenders raised under $20,000. Former State Senator Erica Smith, who dropped out of the US Senate race last week to run for a House seat, endorsed Beasley.

The GOP field is led by former Governor and former Mayor of Charlotte Pat McCrory, who has Burr's endorsement, trailed by Congressman Ted Budd (13th CD), who has Trump's endorsement. 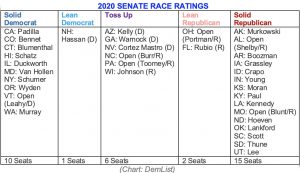 In third-quarter fundraising, McCrory and Budd reported nearly identical amounts -- each a little over $1 million, with McCrory slightly ahead. Budd's total includes a $25,000 loan he made to his campaign. Former Congressman Mark Walker (6th CD), who is also running, reported $122,000 during the quarter.

A November 1-3, 2021 primary survey of likely voters conducted by WPA Intelligence showed McCrory leading with 36%, followed by Budd with 33%, Walker @13% and 18% undecided. 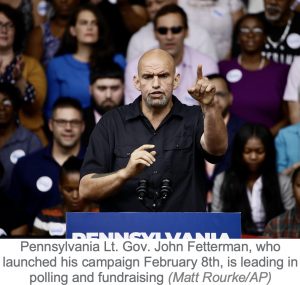 Congressman Conor Lamb (D-17), who entered the race in August, was the next closest competitor with 12%, followed by State Representative Malcolm Kenyatta with 5%. Montgomery County Commissioner Val Arkoosh and State Senator Sharif Street each received 2% and the 6% preferred one of the other six primary contenders. 21% were undecided (MOE: ± 3.2%).

Fetterman also leads substantially on the fundraising front, having raised $2.7 million in the third quarter, for a total of $9.3 million raised as of September 30th, with $4.2 million cash on hand.

Lamb raised the second most of the quarter among all candidates at $1.2 million. Together with his US House campaign account, he has raised $2.6 million, with $2.2 million on hand.

The Republican primary received a major shakeup November 22nd with the decision of Trump-endorsed candidate Sean Parnell to suspend his campaign. Parnell, who was the 2020 Congressional nominee for the 17th CD, had been the subject of allegations and an investigation regarding spousal and child abuse.

Primary polling one month ago had Parnell the clear GOP frontrunner with 31%, while former US Ambassador to Denmark Carla Sands, 2018 Lieutenant Governor nominee Jeff Bartos, and political commentator and 2016 and 2020 congressional candidate Kathy Barnette, all hovered around 7%. 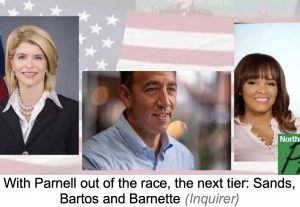 There are at least five other candidates in the race, including yesterday's entry of celebrity doctor and television personality, Dr. Mehmet Oz. Former GOP Congressman Keith Rothfus, who lost reelection in 2018 after court-ordered redistricting put him in contention with fellow Congressman Conor Lamb, is also publicly mulling to a run.

Among Republicans, Carla Sands is leading the charge with $454,00o raised in the third quarter, and a loan to her campaign of $3.1 million. Jeff Bartos also loaned himself $1.2 million earlier in the year, and raised only $251,000 last quarter, more than $200,000 down from his second-quarter efforts.

Senator Ron Johnson, considered Republican's most vulnerable incumbent, is the only GOP Senator facing reelection next year in a state that supported Democrat Joe Biden in the 2020 presidential race. Johnson, who has been keeping his voters and other potential candidates at bay, is expected to finalize a decision on running for reelection to a third term in the coming weeks.

In a Marquette University poll released November 3, 2021, 38% of voters said they would vote to reelect Senator Johnson, 52% would vote for someone else, and 10% say they don’t know or decline to answer. 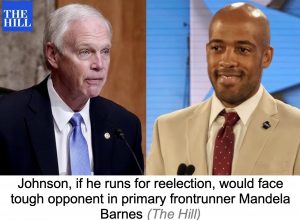 In the interim, a crowded field of a dozen Democratic hopefuls have been lining up, led by Lieutenant Governor Mandela Barnes, who entered that race in July as the highest-profile candidate. Barnes, 35, is Wisconsin's first Black lieutenant governor and, if elected, would become the state's first Black US Senator.

Barnes is also leading on the fundraising front, having raised $1.1 million between July 1st and September 30th. State Treasurer Sarah Godlewski and Milwaukee Bucks executive Alex Lasry also posted fundraising totals over $1 million for the third quarter fundraising period, but that includes a Godlewski loan of $1 million to her campaign and $750,000 by Lasry to his campaign.

A November 11-15, 2021 Data for Progress primary survey showed Barnes leading the pack with 39%, followed by Lasry with 16%, Nelson @6% and Godlewski @5%. The remaining candidates registered at 1% or less, and undecideds accounted for 29%.

The last public general election poll, conducted of likely voters September 8–11, 2021 by Clarity Campaign Labs, showed a hypothetical matchup between Johnson and Barnes at 43% to 43% (MOE:± 3.6%).

Senator Johnson, meanwhile reported raising $906,000 in contributions during the third quarter of the year and had $2.3 million cash on hand.

August 28, 2019 The deadline for qualifying for the Democratic National Committee’s third Democratic primary debate is tonight and, although yet to be formally announced, participants have...