The Outlook
Now less than eight months from the November 8, 2022 midterm elections, there are nine US Senate seats that will decide control of the upper chamber, with five of those currently considered a "Toss Up" in Arizona, Georgia, Nevada, Pennsylvania and Wisconsin. 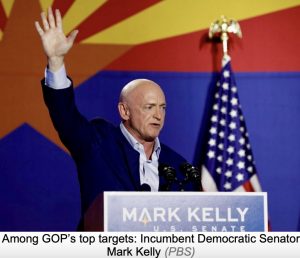 Incumbent Democratic Senator Mark Kelly was elected in the November 3, 2020 special election to fill the remaining term of the late Senator John McCain (R). Kelly unseated interim Senator Martha McSally (R) 51.17% to 48.82% and is now up for reelection to a full term. Kelly, a former astronaut and husband of former Arizona Congresswoman Gabby Giffords (D), is uncontested in the primary.

The GOP field is led by Arizona Attorney General Mark Brnovich, a libertarian-leaning Republican who has served as the state's top prosecutor since 2015, and who is seen as the party’s best chance to beat Kelly in the solidly swing state. The most well-known GOP contender, his name is attached to the 2021 high-profile Brnovich v. the Democratic National Committee Supreme Court case which upheld Arizona's suppressive voting laws. 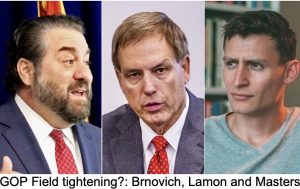 The latest non-partisan poll of registered voters, conducted January 11-13, 2022 by AZPOP/OH Predictive Insights, showed Brnovich leading the GOP pack with 25%, followed by McGuire with 11%, Lamon at 7%, Masters at 6% and Olson at 4%. Most significantly, nearly half of Republican voters (47%) remain undecided.

In the same poll, Kelly earned 42% support to 38% against an unnamed Republican challenger in a general election matchup. A notable 35% of independent voters were still undecided (MOE: +/-3.4%). 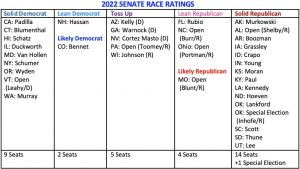 On the fundraising front, Kelly had raised a whopping $27.5 million as of the 2021 year-end reporting period, with $18.6 million cash on hand.

Lamon had raised $8.6 million, including a loan to himself of $8 million, and had $5.9 million cash on hand. 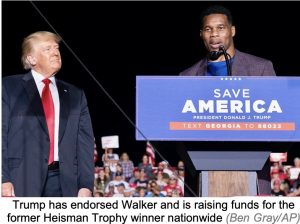 Warnock, who is uncontested in the primary, is facing a field of Republican contenders led by Georgia Bulldog legend and former professional football player Herschel Walker, who has been endorsed by former President Trump.

National Republican leaders have embraced Walker, who was initially viewed with some reservation due to past spousal abuse and financial impropriety allegations made against him. 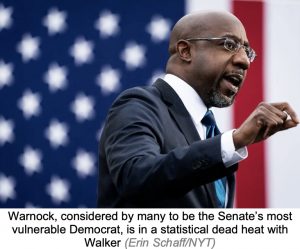 At the end of the fourth quarter 2021 fundraising report, Warnock reported a total of $54 million raised with $22.9 million cash on hand. He raised $125 million for his 2020 campaign.

Walker, who did not enter the race until late August, amassed $5.4 million over the final three months of 2021 -- the most of any GOP Senate challenger in the nation. In total, he has raised $9.1 million with $5.4 million on hand.

Those numbers, however, are expected to be a fraction of what Walker will report in the first quarter of 2022, which is due out in mid-April.

He is benefiting from a nationwide donor base guided by Trump and Senator Minority Leader Mitch McConnell, with 59.47% coming from large individual donors.

May 14, 2021 The Center for Disease Control and Prevention (CDC) announced yesterday that fully vaccinated Americans can unmask indoors and out, signaling the beginning of the end of the deadly...