While the country celebrates the historic election of Joe Biden and Kamala Harris, a number of seats hang in the balance in Congressional districts cross the country.

While the results were not the blue wave Democrats had hoped for, they will still safely control the lower chamber, albeit by the tightest majority in almost two decades. 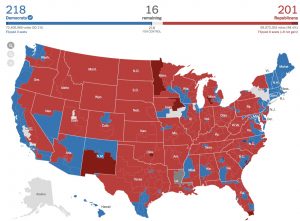 Status of the House

All 435 House seats in the US House are up for election every two years. Heading into the election, Democrats held the majority - having made historic gains in the 2018 midterms with a net 40 seats to win back the House for the first time in ten years.

While the deeper download and analysis of the results are just beginning, we are providing a quick update on the balance of power.

Hanging in the Balance
There are still a remaining 16 races to be called, due largely to mail-in ballots yet to be counted, including in New York, where they are expected to heavily favor Democrats, and in California.

Those include Alaska's at-large congressional seat, and New York's First CD, where the incumbent Republicans are significantly ahead, but there are still notable votes outstanding.  Some outlets have already called them for the GOP.

In Louisiana, held under a majority-election system, the top two voter-getters, Republicans Luke Letlow (33.1%) and Lance Harris (16.6%), advance to a runoff December 5th, guaranteeing the GOP holds onto the seat.

DemList will keep you updated and informed. 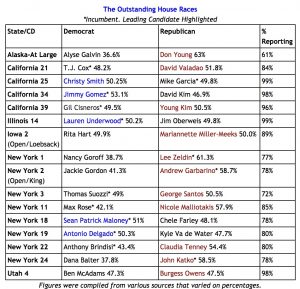 May 20, 2022  To remind us to laugh. On this week’s state primaries “Idaho, Kentucky, North Carolina, Oregon and Pennsylvania all held primaries, which, of course, is news to the vast...