While the results of the presidential marked a number of historic shifts in voter performance, the status of control of the state houses and mansions remains relatively unchanged.

Of the 11 governors races up November 3rd, Republicans flipped control in Montana to increase their share of the nation's governorships by one, and of the 86 legislative chambers up, only two switched party control.

Regardless, the key lies not in the numbers but which party holds state control going into 2021 redistricting. 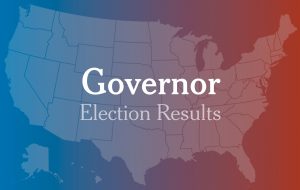 In 2020, Republicans were defending seven seats compared to Democrats' four. Going into the election just one race, the open seat in Montana being vacated by term-limited incumbent Democrat Steve Bullock, was considered a toss up.

The state's at-large Republican Congressman, Greg Gianforte, defeated Bullock's lieutenant governor, Mike Cooney, to flip the seat and increase the GOP's share of the nation's governorships by one to 27, with Democrats controlling 23. 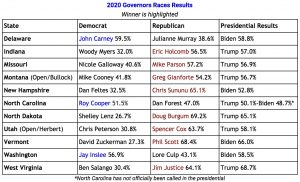 State Legislatures
Going into the elections, Republicans held a majority in 59 of 99 state chambers and Democrats controlled 39. One more, the Alaska House, has a power-sharing agreement between the parties as part of a coalition.

Although the GOP leads substantially in overall chamber control, the margin narrows significantly when calculating the actual seats held, with Democrats occupying approximately 47% to Republican's 52%. Those numbers boosted Democratic hopes of either flipping the balance of power, or increasing their share of it, in a dozen close chambers where the legislature will determine their state's new congressional district maps. 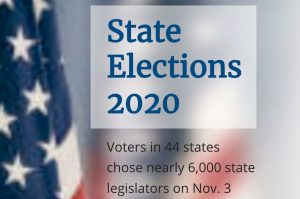 Of the 86 chambers in 44 states that held legislative elections on November 3rd, however, just two legislative chambers switched party control. The New Hampshire Senate and House moved back to Republican control, after both were flipped by Democrats in 2018.

This means 2020 will see the least party control changes on Election Day since at least 1944 when only four chambers changed hands.

State Control
With the GOP gubernatorial win in Montana, and the New Hampshire chamber victories, Republicans now have full control over both state governments, meaning they hold the governor's mansion and both state legislatures.

The end result means Republicans now control 23 states, Democrats control 15, and In 11 states, one power position is held by a different party than the other two. On to redistricting!

June 27, 2019 Round one of the first Democratic presidential debate served its anticipated purpose of boosting, or jumpstarting, the campaigns of the second tier candidates. Surprisingly, no...

August 9, 2019 Every once in awhile. To remind us to laugh. DemList will not publish the week of August 12th-16th, but will back up the following week for the Democratic National Committee in San...