Now just 25 days out from the 2020 presidential election, the Electoral College map has once again seen a shift -- in favor of Democrats.

State of the States
The battleground states of Florida, Iowa and Ohio, all flipped by Trump in 2016, are now in the "toss up" category, and Arizona, which Trump won by 3.5%, is now "leaning blue."

Most telling is that Texas, which has been a reliably red Republican stronghold for over four decades, and which Trump won by 9%, is now in real contention.

Based on our analysis of each state and ratings, Democrats have a total of 290 electoral votes in the Solid, Likely and Lean categories, putting them 20 past the 270 to win the election. 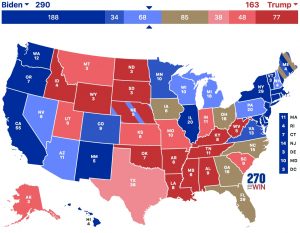 How It Works
The number of electoral votes per state is equal to the size of its congressional delegation, for a total of 538 "electors," or voters, among the 50 states and the District of Columbia.

Maine and Nebraska differ from other states in that each awards two electoral votes to the statewide winner and one electoral vote to the winner in each congressional district.

Each state's electors will cast their votes in their respective state capitals on December 14, 2020, which will then be sent to Congress for counting and certification the first week of January.  The newly elected president and vice president will be inaugurated on January 20, 2021. 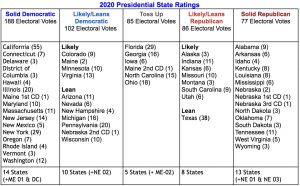 Know the Voting Laws in Your State!

July 24, 2020 President Trump appears to have done an about-face on his approach to the coronavirus pandemic that continues to ravage parts of the country, announcing yesterday that he was...