The US Senate currently stands at 50 Democrats to 50 Republicans. As Vice President Kamala Harris serves as the President of the Senate and has the tiebreaking vote, Democrats officially have control of the Senate.

With just a handful of competitive Senate seats up next November, Democrats are expected to invest heavily in hopes of increasing their razor-thin majority. 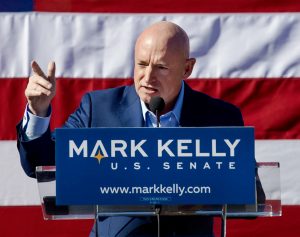 ARIZONA: Incumbent Democratic Senator Mark Kelly (D) was elected in the November 3, 2020 special election to fill the remaining term of the late Senator John McCain (R). Kelly unseated interim Senator Martha McSally (R) 51.17% to 48.82%, and is now up for reelection to a full term.

The state Republican Party has yet to secure a strong frontrunner in the battleground state, which Biden won by less than half a percentage point. Software engineer Robert Paveza is the only declared candidate, but others who have expressed interest include Arizona Republican Party Chair and former US Senate candidate Kelly Ward, Congressman Andy Biggs (5th CD), Congressman Paul Gosar (4th CD) and former Adjutant General of the Arizona National Guard Michael McGuire. Governor Doug Ducey has officially declined to run, but is under pressure to reconsider. 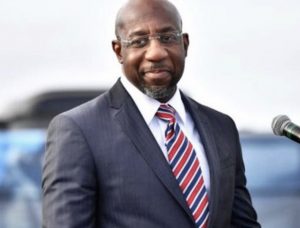 GEORGIA: Incumbent Democratic Senator Raphael Warnock was elected in the January 5, 2021 special election runoff to fill the remaining term of retiring Senator Johnny Isakson (R). Warnock defeated interim US Senator Kelly Loeffler 51.04% to 48.96%, and is now up for reelection to a full term.

NORTH CAROLINA: Three-term Senator Richard Burr (R) is not seeking reelection in the newly classified swing state, which Trump won by just over 1% in 2020. 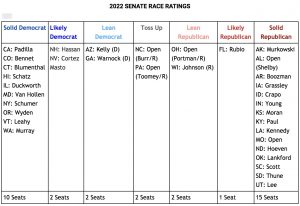 OHIO: Two-term moderate Republican Senator Rob Portman (R), citing "partisan gridlock," is not seeking reelection in 2022. The traditional battleground state, which was long regarded as a bellwether for the presidential, went for Trump by eight points in 2020, breaking the state's record of voting with the winning presidential candidate since 1960. 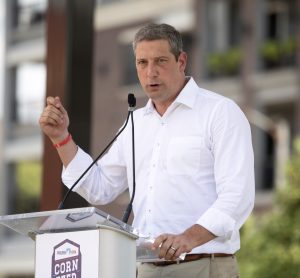 Congressman Tim Ryan, Franklin County Commissioner and former Ohio State Treasurer Kevin Boyce and Minority Leader of the Ohio House of Representatives Emilia Sykes are among the Democrats who have expressed public interest.

PENNSYLVANIA: In one of the country's most politically divided states, which Biden won by 1.26%, two-term Republican Senator Pat Toomey is not seeking reelection.

Republicans who have declared or filed include businessman and 2018 Lieutenant Governor nominee Jeff Bartos, 2016 US Senate candidate Everett Stern, Army veteran and 2020 Congressional nominee (17 CD) Sean Parnell. Political commentator Kathy Barnette, who was the GOP nominee for the 4th CD in 2016 and 2020, and Senate candidate Everett Stern have also joined the race. Primary: May 17, 2022. 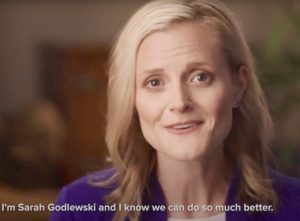 WISCONSIN
Incumbent Republican Senator Ron Johnson is running for a third term - for now. Johnson, the only Senator running for reelection in a state carried by the opposite party's 2020 presidential candidate (Biden won by .06%), is rumored to be contemplating retirement.