This afternoon the US Senate acquitted Donald J. Trump on the Articles of Abuse of Power and Obstruction of Congress, as impeached by the US House of Representatives.

Both votes, primarily along party lines, were a foregone conclusion in the Republican-controlled Senate, a chamber once hailed as the conscience of Congress.

Those days are long gone, with both Houses having sunk into deeply partisan divides, promoted and fueled by the actions of a corrupt and narcissistic President who has unabashedly put his own self interests above those he was elected to represent. 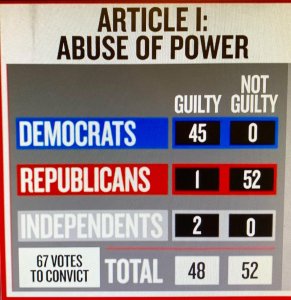 At every turn he has sought to abuse and manipulate our precious US Constitution, playing on the fears and resentment of those it was written to protect, and praying on the less fortunate and noncitizens who were once welcomed with pride by a citizenry that united in the face of the call to justice and freedom.

To the American people President Trump has repeatedly lied, now in excess of 16,000 times as fact-checked by numerous non-partisan organizations, without regard for the consequences.

Indeed, in his third State of The Union (SOTU) address last night, he falsely exaggerated or outright falsified over thirty claims, from the economy, tax cuts, the unemployment rate and the workforce, to criminal justice reform, energy independence, manufacturing and healthcare reform.

There are some who criticize the House's months-long exercise of methodically and exhaustively laying out the charges and largely undisputed evidence of Trump's crimes, when they knew the GOP majority in the Senate would never convict Trump. Others say that the decision should be left to the voters themselves in November.

Senator Mitt Romney (UT), the lone Republican who voted to convict Donald Trump on the charge of Abuse of Power, phrased it best: 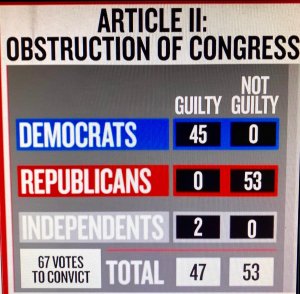 As the historian John Meacham said at the close of today's vote, "We the people are now the jury. As this drama unfolds through this election year, the American voters have the decision to make, is this who we want to be?...It is a pretty clear choice. It seems to me that the more engaged we can be, the more we will find an answer to that, that will be more in keeping with the best of who we've been, as opposed to the worst."

SignUp for the Daily column on the issues, the politics and the players.