President Trump delivered his first State of the Union (SOTU) address Tuesday night, outlining issues facing the nation, his administration's accomplishments over that past year and his agenda for the future.

Only one Cabinet member was missing, Agriculture Secretary Sonny Perdue, the evening's "Designated Survivor." Since the Cold War, one member of the Cabinet does not attend so, in the event of a disaster, there is a surviving Cabinet member.

First Lady Melania Trump, in her first public appearance in several weeks, took her place in the gallery, along with 15 guests who, according to the White House, "have performed an act of heroism or achieved an impressive milestone that illustrates an important theme in the president's speech." 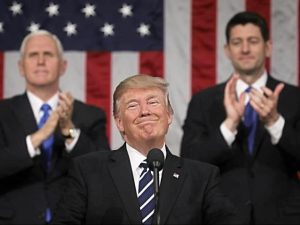 The tradition of honoring everyday Americans at the State of the Union dates back to Ronald Reagan's 1982 recognition of Lenny Skutnik for heroism following the Air Florida Flight 90 crash.

Special Guests
Among the President's guests were a couple from Dayton, Ohio who will invest extra money from the Trump tax cuts into their daughters' education; the founder of a nonproft rescue and recovery organization which aided Louisiana flood victims; a police officer who adopted the newborn child of an opioid-addicted mother; and a US Immigration and Customs Enforcement agent who has spearheaded the arrest of over 100 MS-13 gang members.

Not to be outdone, dozens of Members of Congress, each allowed to bring one guest, filled seats with "Dreamers," illegal immigrants who were brought into the country as children and who are victims of Trump's anti-immigration policies.

Democrats were clad in solidarity black in public support for the #MeToo and Time'sUp anti-sexual harrassment movements. Last month 59 female Members of Congress called on their colleagues to investigate allegations of inappropriate sexual behavior by the President. 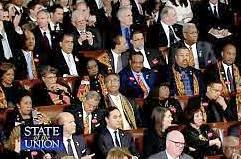 A New American Movement
Before a full chamber divided by more than just the central aisle that separates the two parties, Trump spoke for an hour and 20 minutes on the economy (18+ minutes), foreign policy (18+ minutes), immigration (15+ minutes), health care (6+ minutes) and veterans (4+ minutes).

Although delivered under the unifying veil of a "new American Movement," the scripted speech did little to disguise what the Los Angeles Times called Trump's "familiar appeal to fear and resentment, particularly toward noncitizens and foreign adversaries."

While Trump touted his accomplishments on the economy, jobs and enactment of "the biggest tax cuts and reforms in American history," fact checkers were scrambling to dispute most of his claims in the speech.

No mention, of course, was made of one of the greatest security threats of our time, the Russian hacking of the presidential campaign, and the ongoing investigation. On Monday the administration announced they will not be imposing congressionally- mandated sanctions on Russia.

Opposition Response
In a passionate and decisive speech, Congressman Joe Kennedy III (MA-4th CD) delivered the official Democratic response to the SOTU, attacking the divisive politics of the White House. 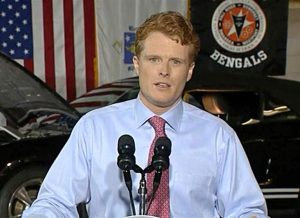 Kennedy, the grandson of the late Robert F. Kennedy and great-nephew of JFK, provided viewers with inspiration reminiscent of another era, echoing the themes of President Obama's historic 2004 speech that launched his rise to the presidency.

Said Kennedy of the Trump administration, "Their record is rebuke to our highest American ideal, the belief that we are all worthy, that we are all equal, that we all count in the eyes of our law and our leaders, our god, and our government. That is the American promise."

March 2, 2021 The history of the federal minimum wage, already one of political struggle, added a new footnote to its tumultuous journey last Thursday when it became the center of a parliamentary...