While the 2018 midterm elections are expected to flip control of the US House, an equally important outcome is control of the state legislatures and gubernatorial seats that will shape future congressional districts.

The decennial (every ten years) population census will be taken in 2020, and from that the 2021 redistricting, or redrawing, of the electoral district map in each state will take place.

Each state determines its own process for drawing electoral lines, with 27 drawn by state legislatures, 12 by an independent or bipartisan redistricting commission, and 4 by independent bodies but with final approval by the legislature.

Of the bipartisan commissions, however, only Arizona and California are considered truly independent as the others are appointed by, or report to, the legislature. 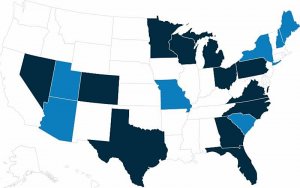 According to the National Democratic Redistricting Committee, the state chambers and governor's races that are most important for shifting or retaining the balance of power in the redistricting process, are highlighted below.

Seven states (Alaska, Delaware, Montana, North Dakota, South Dakota, Vermont and Wyoming) have only one congressional district so redistricting doesn't apply. Likewise, the five US territories and the District of Columbia, which each send a non-voting delegate to the House of Representatives, are also not affected by redistricting.