The fourth and final day of hearings for US Supreme Court nominee Judge Ketanji Brown Jackson was held today, with the testimony of witnesses and experts for and against Jackson's confirmation.

The civil nature of today's proceedings provided a welcome relief to Tuesday and Wednesday's grueling questioning of the nominee by GOP Judiciary Committee members intent on getting out their own midterm messaging.

With an anticipated vote by the Committee on April 4, proponents, opponents, activists and pundits are going into overdrive on-air and online to spin the hearings in hopes of influencing the outcome.

Key Takeaway
Jackson is "imminently qualified," as confirmed by representatives from the American Bar Association in today's hearings. Their evaluation, presented in a 23-page document today by Ann Claire Williams, Chair of the ABA's nonpartisan Standing Committee on the Federal Judiciary, concluded: 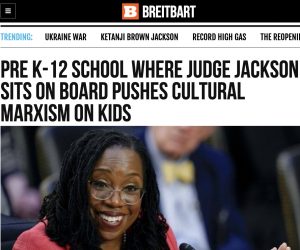 The Attacks: Key Themes
Several themes of attack by opponents were on display throughout this week's 25+ hours of questioning of Jackson by members of the Judiciary Committee. Among the narratives on right-wing media and social media:

* Jackson is soft on crime for sex offenders or is a “pedophile sympathizer”
This was a pervasive theme throughout the hearings, with Senator Josh Hawley (R-MO) leading unrelenting attacks against Jackson, which were echoed by Senators Lindsay Graham (R-SC), Ted Cruz (R-TX), Tom Cotton (R-AR), John Cornyn (R-TX), Marsha Blackburn (R-TN) and others.

The allegations and distortion of Jackson's record have been debunked by major media outlets, legal experts and the ABA.

* Attacking Jackson for her alleged advocacy of Critical Race Theory (CRT)
Ted Cruz led the narrative on this one, misapplying once again the GOP's perception that the academic concept is about race. Conservative outlets are also using the library of socially conscience books at Georgetown Day School, where Jackson sits on the board, as evidence that Jackson is directly connected to critical race theory.

Jackson underscored the fact critical race theory (CRT) is an "academic theory" that "doesn't come up in my work as a judge. It's never something that I've studied or relied on, and it wouldn't be something that I would rely on."

On Judge Jackson saying she can’t define what a “woman” is
In an 11th-hour question from Blackburn Tuesday night, the Tennessee Senator asked Jackson about the definition of “woman” - an insincere piece of rhetoric commonly advanced by anti-transgender figures.

Blackburn's attempt came as a segue from questions about the teachings at Georgetown Day School and whether Jackson believes that “schools should teach children that they can choose their gender?” 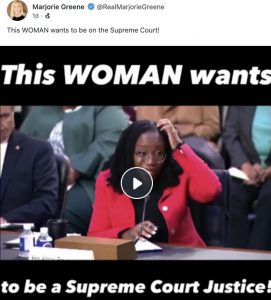 * Reaction to Jackson’s response to questions on court expansion, known as "court-packing"
Right-wing outlets have expressed their discontent with Jackon’s remarks on expanding the Supreme Court, accusing the judge of “dodging questions” or “refusing” to address the topic.

When asked whether she supports adding additional justices to the nation’s highest court, Jackson said such speculation would go beyond “the proper role of a judge” and "in my view, judges should not be speaking to political issues and certainly not a nominee for a position on the Supreme Court.”

* Attacking Judge Jackson’s views on abortion rights
Republican senators falsely painted Jackson as hostile to anti-abortion views, misrepresenting twisted words from a legal brief she co-signed years ago as evidence she would rule broadly against abortion opponents. Right-wing commentators and groups have decried her as pro-abortion.

In fact, Jackson stated, as a jurist, she believes a woman’s constitutional right to terminate a pregnancy protected by 1973’s landmark decision Roe v. Wade is “the settled law of the Supreme Court.”