If there were one word that best described last night's Democratic primary debate in Charleston, South Carolina, it would be "anger." 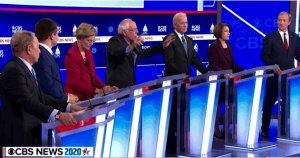 NBC: Sanders was attacked 33 times, Bloomberg 17 and the rest of the field 5 times or less

In the critical debate, the last before the Palmetto State's February 29th primary contest and the March 3rd Super Tuesday primaries, the candidates attempted to forcefully make their case, sometimes amidst a cluster of yelling for attention.

Hosted by CBS, Congressional Black Caucus Institute and Twitter, the event was the tenth of twelve Democratic presidential primary debates, and the least disciplined in reeling in the candidates on stage.

Even Joe Biden, who characteristically defers to the 45-second response limit, regularly went overtime, at one point announcing to moderators that he was "not going to be quiet anymore."

As anticipated, frontrunner Bernie Sanders and emerging Michael Bloomberg took the brunt of the attacks, including from each other.

Citing the low national unemployment rate, Commentator Nora O'Donnell asked Sanders how his socialist agenda can do better than President Trump on the economy.

Sanders, turning to Bloomberg, hit on a familiar theme. "The economy is doing really great for people like Mr. Bloomberg and other billionaires...But for the ordinary American, things are not so good. Citing the lack of wage increases and insured Americans, those struggling with student debt, and the number of homeless, "including 30,000 veterans," Sanders said, "That is not an economy that's working for the American people. That's an economy working for the 1%."

On whether Sanders' economy would be better for America than President Trump's, Bloomberg said, "Vladimir Putin thinks that Donald Trump should be president of the United States." Looking squarely at Sanders, he said, "And that's why Russia is helping you get elected, so you will lose to him." 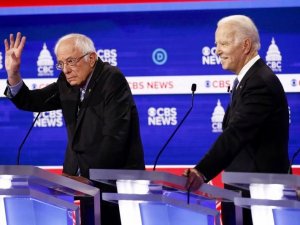 Bloomberg, who had a much-improved, but far-from-inspiring night, was referring to recent US Intel reports that Russia is interfering in the 2020 election and trying to help Sanders.

Moderator Gayle King ask Buttigieg why the Russians would want to help Sanders.
Buttigieg, in another articulate performance, said, "I will tell you what the Russians want...They want chaos. And chaos is what is coming our way...if you think the last four years has been chaotic, divisive, toxic, exhausting, imagine spending the better part of 2020 with Bernie Sanders vs. Donald Trump.

Steyer: Bernie Sanders' analysis is right. The difference is, I don't like his solutions. I don't believe that a government takeover of large parts of the economy makes any sense for working people or for families...The answer is for us to break the corporate stranglehold on our government and have the government work for the people again."

A feisty Biden joined the fray, "Let's talk about being progressive. Walking distance of here is Mother Emanuel Church, nine people shot dead by a white supremacist. Bernie voted five times against the Brady Bill and wanted a waiting period."

He went on to note that Sanders toyed with a primary challenge to President Obama because "he said the president was weak and our administration was in fact not up to it...Progressive is getting things done, and (Obama and I) got a lot done."

After joking "I'm hearing my name mentioned a little bit tonight," Sanders deflected to attacking both Biden and Buttigieg for taking money from billionaires. 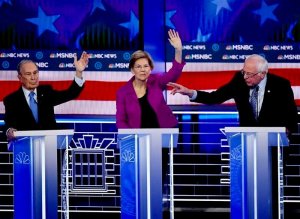 On his slip in numbers in African American support, Biden proclaimed he will win South Carolina, where 60% of the vote is black, saying, "The people know me. My entire career has been wrapped up in dealing with civil rights and civil liberties. I don't expect anything. I plan to earn the vote."

Gayle King asked Bloomberg about his much maligned "stop and frisk" policing policy while Mayor of New York.
Bloomberg: "We let it get out of control and when I realized that, I cut it back by 95%. And I've apologized and asked for forgiveness." He pointed to his record of improving the school system, jobs and housing for those in black and brown communities, adding he has the endorsement of 100 New York black elected officials.

Asked if stop and frisk were racist, Buttigieg answered an affirmative, "Yes." Acknowledging issues with racial justice in my own community as Mayor, he added, "I'm not here to score points...I come to this with some humility because I'm conscious of the fact that there are seven white people on this stage talking about racial justice."

Amy Klobuchar emphasized the need to move forward, "Martin Luther King once said that we are all tied in a single garment of destiny, and that what affects one of us directly affects all of us indirectly. So when there is racism in the criminal justice system, then we need to fix it."

Warren, still reluctant to wage full scale war against ideological partner Sanders, said, "Bernie and I agree on a lot of things," but we need "a president who is going to dig in, do the hard work, and actually get it done." Pointing to his universal healthcare plan, she said, "Bernie's plan doesn't explain how to get there." 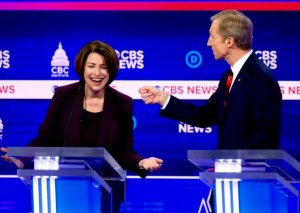 Klobuchar on Sanders' plan: "The math does not add up... On 60 Minutes this weekend, he said he wasn't going to rattle through the nickels and the dimes. Well, let me tell you how many nickels and dimes we're talking about: nearly $60 trillion." Klobuchar pleaded for a real plan "for the people of America..instead of a bunch of broken promises that sound good on bumper stickers."

Steyer: "We are looking at a party that has decided that we're either going to support someone who is a democratic socialist or somebody who has a long history of being a Republican."

Sanders held his own throughout the evening, defending his frontrunner status.

When it came to Bloomberg, Warren did not hesitate to attack, calling out his past support for rightwing Republican candidates, including Lindsay Graham (SC) and Scott Brown (MA), whom Warren unseated in 2012. Warren, the best debator on stage, said "The core of the Democratic Party will never trust him"...making him "the riskiest candidate..on this stage."

Bloomberg: "I have been training for this job since...9/11. I know what to do." Adding that he was elected three times to run a city which is "bigger than most countries," Bloomberg said, "I'm the one choice that makes some sense. I have the experience. I have the resources. And I have the record."

Bloomberg also pointed to $100 million dollars he spent to help elect "Democrats who put Nancy Pelosi in charge and gave the Congress the ability to control this president." 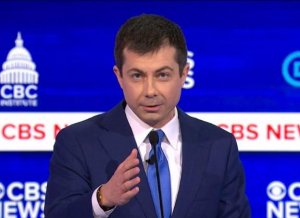 Warren and Bloomberg then renewed their debate over non-disclosure agreements signed by women said to have endured prejudice at his company. Warren, referring to her own experience in having been fired after becoming pregnant, said, "At least I didn't have a boss who said to me, 'Kill it,' the way that Mayor Bloomberg is alleged to have said."

Bloomberg adamantly denied making that comment, adding that after Warren raised the NDAs at the last debate, his company discontinued use of the agreements. "I don't know what else she wants us to do ... The trouble is with this senator enough is never enough."

Biden pointed to his record with the Ebola crisis and his work in setting up a White House office on pandemic diseases. Noting he was the only one on stage who "has ever dealt internationally with any of these world leaders" on these subjects, he also promised to immediately restore funding cuts to the CDC and NIH made under the Trump administration.

Trump's dealing with the crisis was one of the few times the field went after the current president. 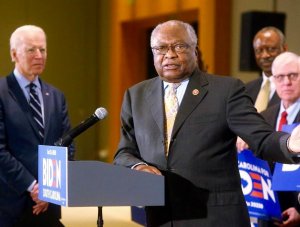 April 13th, 2017 One of the issues that has haunted President Trump through the campaign and through the now 83 days of his tenure, is his refusal to release his tax returns. Despite the call by...