A sixth 2017 special election is now on the books - Utah's Third Congressional District, being vacated by five-term Republican Congressman Jason Chaffetz, who will be resigning from Congress on June 30th.

The "decision to return to the private sector" mid-term by Chaffetz, still a potential 2020 gubernatorial
contender, came as a surprise, fueling speculation of a pre-emptive exit to avoid further damage under Trump and the ongoing, escalating, Russian investigations.

Jason Chaffetz became a symbol of public discontent over repeal of Obamacare after he suggested, in a townhall meeting, that uninsured Americans spend money on their own health care "rather than getting that new iPhone that they just love."

As Chair of the powerful House Committee on Oversight and Government Reform, Chaffitz drew significant criticism for his handlings of the investigations of Hillary Clinton in 2015 and Michael Flynn at the onset of the Russia probe this year.

The Third CD, which Chaffetz has held since 2008, covers portions of Salt Lake and Utah counties as well as Carbon, Emery, Grand, San Juan, and Wasatch counties. In the 2016 presidential Trump won the CD 47% to HRC's 23%, with 19% going to Utah native Evan McMullin.

Pending: Jim Bennett, son of former US Senator Bob Bennett (R) and head of the newly formed, "centrist" Utah United Party, filed as his party's candidate - but because state officials had not completed verification of the party's formation application prior to the May 19th candidate filing deadline, Bennett did not qualify. Bennett is appealing but, if unsuccessful, will run as an unaffiliated candidate. 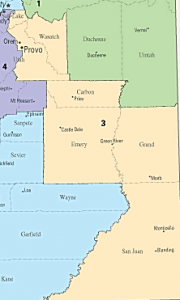 Unaffiliated or independent candidates, who do not run as a member of a recognized political party, have until June 12th to gather the required 7,000 registered voter signatures to file with the state's election office.

The Count
The first two of the 2017 Special Elections, Kansas and Montana, resulted in victories for the GOP - but both by only single-digit margins in traditionally solid Republican seats where Trump beat Clinton by more than 20% in the presidential.

Although the losses don't bring Democrats any closer to the 24 seats they need to retake control of the House in 2018, the narrowing numbers to-date provide Dems with ample fodder to prove the growing public discontent with Trump's presidency - now at mere 49.7% approval rating (RCP 5/1-5/29).