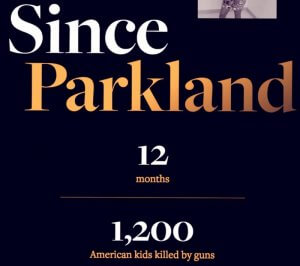 Last Thursday was the year anniversary of the Parkland, Florida mass shooting at Marjory Stoneman Douglas High School that killed 17 and Injured 12.

That shooting inspired a new national movement to combat gun violence -- one that involves, for the first time, many of the teenage victims themselves.

Following the tragedy, the Trump administration enacted a ban on bump-stocks. It was the only promise of many to Parkland survivors kept by the President.

Since President Trump's meeting with families one week after the massacre, there have been nearly 350 mass shootings (four+ persons) in the US -- nearly one a day.

The United States boasts a gun-related murder rate 25 times higher than any other high-income nation.

The Victims
*  1,149+ children school-aged or younger died in an incident involving guns.
*  Among school-aged children, at least 154 of the deaths were accidental, and 131 were domestic incidents. Among the domestic, 91 were killed in murder-suicides where the shooters killed themselves.
*  Older teens 14-18 were most commonly victims of gun violence, followed by children ages 2 to 3. 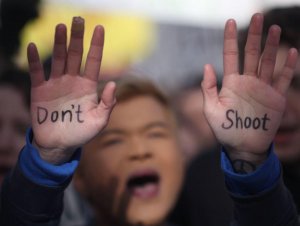 One Year Since Parkland (MWilson/Getty)

The Players
In the 2018 elections, for the first time in history, gun control groups outspent gun rights groups. This was in large part to new organizations like Michael Bloomberg's Everytown for Gun Safety and former Congresswoman Gabby Giffords' Law Center to Prevent Gun Violence.

Comparatively, the National Rifle Association (NRA) PAC spent approximately$2 million less than gun control advocates, with $9.73 million invested in supporting, or opposing, candidates. That is almost one-third of what they spent in the last midterms. 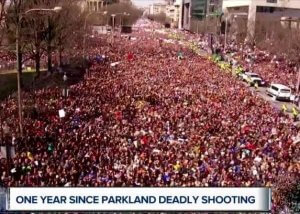 Congress
115th Congress: The Republican-controlled House did not pass any gun safety legislation.

The last major piece of gun control legislation to make it into law was the 1994 assault weapons ban, which expired in 2004, and repeated attempts to renew it have failed.

116th Congress: The Democratic House majority has introduced H.R.8, a bill that would require gun buyers to undergo background checks in virtually every single gun sale.
Last week the House Judiciary Committee approved the bill, which is scheduled for a House vote next week. It must, however, pass both the House and Senate.

The Voters
In 2019 there are three gubernatorial races up in Kentucky, Louisiana and Mississippi; seven state legislative chamber elections in Louisiana, Mississippi, Virginia, and the New Jersey General Assembly; and 11 major city Mayoral elections. Make your vote count.