President Joseph Biden signed the American Rescue Plan Act of 2021 into law yesterday, delivering a major victory for both his administration and the American people. 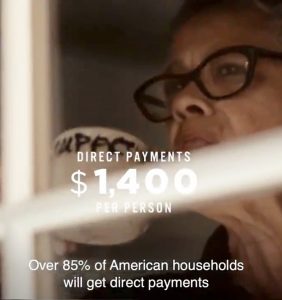 Passage of the $1.9 trillion coronavirus relief bill came 50 days after the start of Biden's presidency, and exactly one year after the World Health Organization declared the worldwide pandemic official.

In his first prime-time television address since being elected, Biden spoke to the nation on Thursday night, outlining the progress of his administration in the battle against COVID, and the plan's promise of much-needed relief to millions across the country. 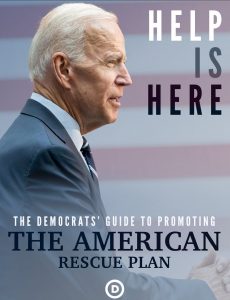 Although the bill has passed, it will take the participation of the nation's citizens to ensure its success, and Biden and the Democratic Party are wasting no time in selling it to the public.

The people's positive perception of the plan will also play a major role in the upcoming midterm elections -- as its success or failure will affect Democratic candidates up and down the ticket.

In an internal White House memo this week, Deputy Chief of Staff Jen O'Malley Dillon said they planned to build on the plan's popularity by carrying its message "to every corner of our country through travel, local press and direct engagement in communities with the President, the vice president, the first lady, the second gentleman, Cabinet members and top officials from throughout the administration."

This morning the Democratic National Committee (DNC) released a comprehensive guide to promoting the American Rescue Plan, including messaging, social media tools, constituency and state-by-state tools for advocates. This will be coupled with trainings for state party officials and grassroots community leaders on touting the plan.

As a part of their media rollout, the DNC has released a TV ad, to run nationally in battleground states and online in the coming weeks. 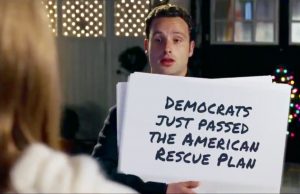 On a lighter note, they also released a clever spoof of a scene from the movie "Love Actually" promoting the Act. Worth watching.

Help is Here. Have a good weekend.

DemDaily: Help Is On The Way. Breaking Down the American Rescue Plan 3/9/21