On Monday, 60,000 members of the International Association of Theatrical Stage Employees (IATSE), who work in television and film production across the country, voted to strike for the first time in the union's 128-year history.

“The members have spoken loud and clear. This vote is about the quality of life, as well as the health and safety of those who work in the film and television industry. Our people have basic human needs like time for meal breaks, adequate sleep and a weekend. For those at the bottom of the pay scale, they deserve nothing less than a living wage.” -- IATSE International President Matthew Loeb

Overall voter turnout was nearly 90%, and support for strike authorization was more than 98%, a near-unanimous margin.

Although the strike action has been approved by the membership, IATSE President Matthew Loeb has not pulled the trigger on a date as he continues to negotiate with the Alliance of Motion Picture and Television Producers, the entertainment industry's official collective bargaining representative, this week.

AMPTP negotiates 58 industry-wide collective bargaining agreements on behalf of hundreds of motion picture and television producers, dating back to 1982. AMPTP President Carol Lombardini said the organization “remains committed to reaching an agreement that will keep the industry working. We deeply value our IATSE crew members and are committed to working with them to avoid shutting down the industry at such a pivotal time, particularly since the industry is still recovering from the economic fallout from the Covid-19 pandemic." 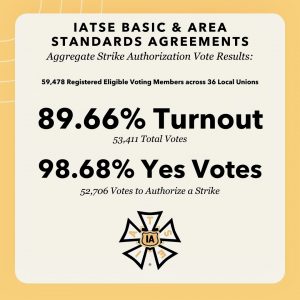 The unions which serve as the foundation of the entertainment industry include the American Federation of Musicians (AFM), Directors Guild of America (DGA), International Brotherhood of Electrical Workers (IBEW), Laborers Local 724, Screen Actors Guild-American Federation of Television and Radio Artists (SAG-AFTRA); Teamsters, Local #399; Writers Guild of America (WGA) and International Alliance of Theatrical Stage Employees (IATSE), among others.

“We aren’t asking for the world. We want fair wages and a safe and healthy working environment. The studios need us… We should be treated as a valuable asset -- a partner, not a cog in the system.” said Salvador Perez, President of the Costume Designers Guild.

IATSE represents over 150,000 technicians, grips, directors of photography, hairstylists and makeup artists, writers assistants and craftspeople in film, TV, and theater in the U.S. and Canada, including 36 locals and 60,000 members impacted by the negotiations.

If Loeb and AMPTP President Carol Lombardini do not come to an agreement, then the pending strike will effectively shut down film and TV production nationwide. 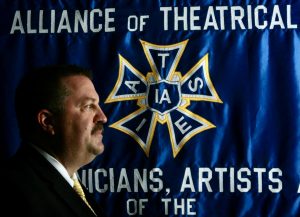 Major film and TV shows from companies including CBS Studios, Columbia Pictures Industries, Warner Bros. Pictures and Metro-Goldwyn-Mayer Pictures, among others, are produced under the Basic and Area Standards Agreements. The Basic Agreement covers both West Coast and some national Locals, while the Area Standards Agreement generally covers workers employed in areas that are not New York and Los Angeles.

The Basic Agreement also covers production of projects for streamers like Netflix, Apple TV+, Paramount+ and Disney+. Workers on Videotape Agreement-covered content like reality shows, game shows and talk shows from companies like ABC Signature Studios and Cartoon Network Studios would also withhold their labor in a strike. 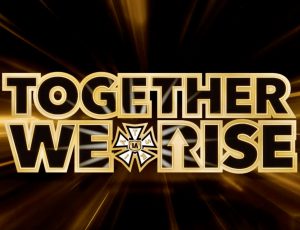 In addition to other entertainment unions, the IATSE strike has garnered support from politicians. In an open letter to AMPTP's Lombardini, 50 California State Senators and Assembly members urged "the AMPTP to recognize the sacrifices made by workers in this industry, to negotiate in good faith, and to reach a fair contract to address the core issues of health and safety, reasonable work hours, and fair pay.”

New York’s state senators have also weighed in, and last week more than 118 US Senators and House Members sent a letter to AMPTP urging a settlement.

SignUp for the Daily updates on the issues, politics and the players.
Follow us on Facebook, Twitter & LinkedIn
Sources: AFL-CIO, Backstage, Deadline, Hollywood Reporter, IATSE, Variety

A key component of DemList’s mission is promoting the good work of the players and allies. One is democratic strategist Mike Lux – and today is his birthday!