In the first major presidential primary poll since last week's third Democratic primary debate, there appears to be a shake up in the top tier.

The September 13-16, 2019 NBCNews/WallStreetJournal poll of registered Democratic voters (MOE +/- 4.36%), shows Massachusetts Senator Elizabeth Warren closing the gap to within 5% points of frontrunner Joe Biden, further distancing the two from the rest of the pack.

While the former Vice President still leads the horserace with 31%, up 5 points since July, Warren is at 25%, with a gain of 6 points. Vermont Senator Bernie Sanders' support rose only 1% in the same period, while California Senator Kamala Harris' dropped 8% points.

A Deeper Dive
The crosstabs or breakdown, however, reveal deeper divisions within the race not reflected in the topline numbers.

Among the three contenders in double digits, Biden strengths are with older, moderate, and African American voters, Warren does well with liberals, women and the college educated voters, and Sanders strongest constituency remains concentrated among Democrats under age 35. 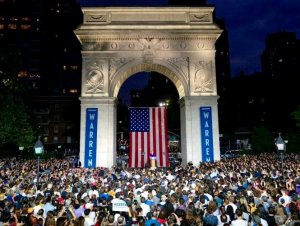 Enthusiasm
Warren 35%, Sanders 25%, Biden 23%
Enthusiasm for Warren has surged, surpassing Sanders and Biden in recent months. This may be the most important takeaway from the poll, as an indicator of momentum and broad appeal that could continue to benefit her when others drop out.

There may still be room, however, for movement from the wings, with a full stage qualifying for the DNC's fourth Democratic Debate, scheduled for October 15th in Westerville, Ohio.

Says Bannon, "The fat lady hasn't sung yet. Only 9% of Democratic primary voters have a solid commitment to their choice and only a minority of Biden, Warren and Sanders supporters are enthusiastic about their favored candidate."