Now less than seven months out from the November 6, 2018 elections, some of the Democratic primaries have started to draw the attention of the greater populace, including the New York Governor's race.

Re-elected in 2014 with 54%, Cuomo is widely considered to have presidential ambitions, and is on any list of 2020 contenders. 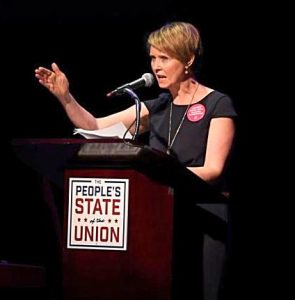 Despite having legalized same-sex marriage and enacted landmark gun control legislation during his tenure, he is considered a centrist.

Nixon, who is best known for her starring role in the hit series "
Sex In The City" and is a self-proclaimed liberal, announced her candidacy March 19th.  She immediately came out of the gate swinging with attacks on Cuomo as an "insider," a partner in corruption surrounding the city's subway system, and on "backroom deals" with the state's GOP.

Nixon has hired campaign aides close to Mayor de Blasio, a Cuomo detractor, and her treasurer is Zephyr Teachout, who ran and lost against Cuomo in 2014.

Nixon's insurgent campaign received a boost on Saturday when she received the endorsement of New York's Working Families Party, which represents the left wing of the party.  Nixon, a lesbian, is married with three children and has been an increasingly vocal advocate on education issues. 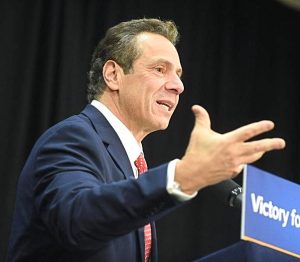 New York Politics
New York is traditionally a blue state, voting to deliver its 29 electoral votes to the Democrat in the last five presidential elections. In the 2016 election Hillary Clinton won 59.01% to Trump's 36.52%.

Democrats have a "triplex" or control of the state's top positions of Governor, Attorney General, and Secretary of State, but power is divided in the legislature.

Republicans have held the majority in the New York State Senate since 2011, while Democrats have maintained control of the State Assembly.

Polling
An April 8th-12th poll by the Siena Research Institute shows Cuomo with a comfortable lead over Nixon among registered Democrats, 58 % to 27%, in a potential primary matchup.

The poll also shows that, despite his significant lead, Cuomo may still be vulnerable. About 49% of New York voters now view Cuomo favorably, compared to 44% with an unfavorable view.

Although just weeks away, the Republican party is still juggling an unprecedented field of 13 contenders — who will battle it out tonight in the third Presidential debate.

With less than six months to go, the Democratic National Convention Committee is operating at full speed. Whether you plan to be a convention go-er, or watcher, now is the time