A week from today we will know who the next US President will be, as well as which party will have control of the US Senate and, ultimately, the next Supreme Court nominee.

If the rising Blue Wave of 2016 sweeps in the top of the ticket election day, Democrats could be looking at 2 to 7 gains in the Senate. It will take a net gain of 5 seats for the Dems to take control of the Upper Chamber, which currently seats 54 Republicans, 44 Democrats and 2 Independents (that caucus with the Democrats). 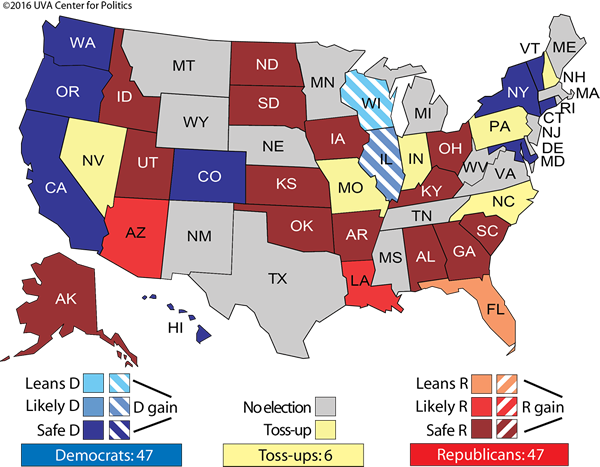 Not surprisingly, all eight are in presidential battlegrounds states.

However, six races -Indiana, Missouri, North Carolina, Nevada, New Hampshire and Pennsylvania -- are still considered statistic toss-ups which could push, or be-pushed by, the presidential tide.

Swing Senate Seats
* Incumbent.  Source: RealClearPolitics. Polling averages are based on current reputable polls in each state.
Collectively these states represent a total of 105 electoral votes, or 39% of the 270 needed to secure the presidency.
Click to go to DemList's Election Protection Connection for state-by-state voter protection organizations and volunteer opportunities, as well as for a list of all final Clinton Campaign Events !

November 10, 2022 Although Democrats may have defied the tides of history in beating back the anticipated “red tsunami” in the 2022 midterms, they are still struggling to retain their...