While the impeachment hearings, trial and tribulations of Donald J. Trump, and the Democratic presidential race to replace him, have consumed every media minute for the last fews months, there are 35 US Senate races up in 2020 that are in full swing.

THE SENATE
Current Count: 47 Democrats* to 53 Republicans
*Includes two Independents who caucus with the Democrats

With almost twice as many seats up, the GOP is facing a number of serious challenges, including to their top four most vulnerable incumbents in Arizona, Colorado, Maine and North Carolina.

Waiting in the Wings
Behind them are another group of Senate race that, although rated in the "Lean and Likely" GOP category, are giving Democrats hope of retaking the upper chamber in November due to strong Democratic challengers and Republican Party infighting.

GEORGIA
Georgia has two US Senate seats up in 2020. The first is the regular election up for incumbent Republican David Perdue, and the second, a special election to fill the remaining term of Republican Johnny Isakson, who left the Senate last December due to health issues. 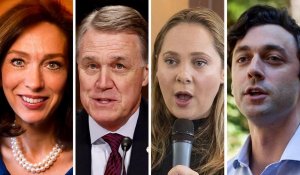 Georgia One
Georgia's junior Senator, David Perdue, was first elected in 2014 with 52.89% of the vote. A former businessman, and cousin of former Trump Secretary of Agriculture Sonny Perdue (R), he served as CEO of Reebok, Dollar General, and Pillowtex.

Former House Minority Leader Stacey Abrams, who narrowly lost the 2018 Governor's race, 48.8% to Republican Brian Kemp's 50.2%, has taken herself out of the running.

President Trump's first choice for the seat was not Loeffler, but outspoken Congressman Doug Collins, helped lead the fight against the President's impeachment in the House, and who is now challenging Loeffler. 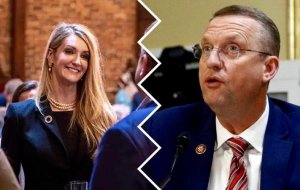 NRSC's Executive Director took it further with CNN, calling Collins "a swamp creature," and "everything Georgians hate about Washington."

In the special election, the GOP and Democratic candidates will all compete in the general election in November. If one candidate gets above 50%, they will win the Senate seat outright. If no candidate reaches a majority of the vote, then there will be a two-person runoff in January.

Democrats who hope to benefit from the GOP chaos, include Matt Lieberman, businessman and son of former US Senator and 2000 VP candidate Joe Lieberman, who entered the race last October.

In January, 2020, Ebenezer Baptist Church Reverend Raphael Warnock (D), and former State Senator and former US Attorney for the Southern District of Georgia Ed Tarver (D), jumped into the contest.

IOWA
Incumbent Republican Joni Ernst, who won the seat of retiring Senator Tom Harkin (D) in 2014 with 52.2% to 43.7% over Democratic Congressman Bruce Braley, is is the first woman elected to represent Iowa in Congress. 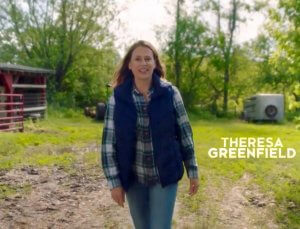 Greenfield: "I'll never forget who I am, where I'm from or who I'm fighting for" (Ad/Click)

She served in the Iowa State Senate from 2011 to 2014, and is a retired Lieutenant Colonel in the Iowa Army National Guard.

Although only in her first term, she was on Trump's short list for Vice President, and her close alignment with the President on Issues of trade and agriculture have hurt her support amongst Iowa farmers.

Ernst is being challenged by a field of Democratic candidates led by Theresa Greenfield, an urban planner and real estate broker. Greenfield, who grew up in Iowa as a "farm kid with farm kid values," was a candidate for Iowa's 3rd congressional district in 2018 but dropped out before the primary.

Although Obama won Iowa twice, Trump won the Hawkeye State by nine points in 2016. In 2018, however, Democrats flipped two seats to take control of three of the four congressional districts.

The Democratic Senatorial Campaign Committee (DSCC) weighed in early on the race with a June, 2019 endorsement of Greenfield, who has since received other prominent endorsements from local labor, NARAL, Brady PAC, EMILY's list and dozens of Iowa elected officials.

KANSAS
In the open seat being vacated by retiring four-term Republican Senator Pat Roberts, the GOP's own internal party turmoil is one of Democrats' most significant advantages.

In the Republican primary, former Republican Secretary of State Kansas and 2018 GOP nominee for Governor Kris Kobach, is leading the field -- to the dismay of many in his party. 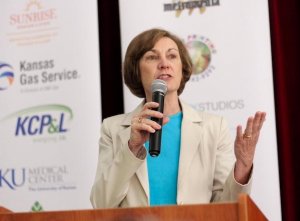 The polarizing Kobach, who has built a national reputation on his hardline anti-immigration stances, his advocacy of anti-abortion legislation and a national Muslim registry, was defeated by Laura Kelly in the 2018 general election, 48%-43%.

Kansas Republicans had hoped Secretary of State Mike Pompeo would enter the race, but within three days after he publicly bowed out last month, Congressman Roger Marshall (R-1st CD), also running in the primary, raised $250,000.

Marshall, who had over $1.9 million on hand as of the end of 2019, is rumored to be Senator Majority Leader Mitch McConnell's preferred candidate. Former Kansas City Chiefs defensive end David Lindstrom, Kansas State Senate President Susan Wagle, Kansas Board of Education member Steve Roberts, and conservative writer Bryan Pruitt are also competing for the GOP nomination

State Senator Barbara Bollier, a former Republican, is the frontrunner for the Democratic nomination. Bollier changed her party affiliation in December of 2018 after retribution from state GOP leaders for her endorsements of Democratic candidates, including Laura Kelly. Bollier said that the "breaking point" had been the Kansas Republican Party's inclusion of anti-transgender language in its platform.

Bollier, who raised $1.1 million in the last quarter of 2019, has received the endorsement of Kelly, the Democratic Senatorial Campaign Committee (DSCC), and former Kansas Governor and Obama HHS Secretary Kathleen Sebelius (D). 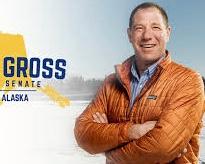 A potential  sleeper is Alaska, where Independent Dr. Al Gross is challenging GOP incumbent Senator Dan Sullivan. While consistently rated as a "safe" Republican seat, the Juneau Orthopedic surgeon is drawing attention as an impressive candidate, and has the support of the Alaska Democratic Party and the DSCC.