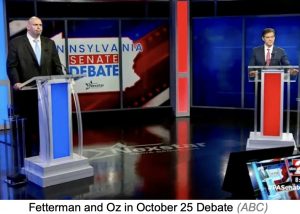 In last night's highly-anticipated Pennsylvania US Senate debate, Democratic Lieutenant Governor John Fetterman and Republican Dr. Mehmet Oz squared off in their only debate before the 2022 midterm elections -- now less than two weeks away.

Although Fetterman led by double digits in August, concerns over his health have contributed to closing the gap in recent weeks. Polls show the two candidates in a statistical dead heat.

Fetterman, a former Braddock Mayor who was elected on the ticket with Democratic Governor Tom Wolf in 2018 with 57.77% of the vote, suffered a stroke five months ago. Although doctors said he did not suffer cognitive damage, and a full recovery is expected, he continues to be challenged with halting speech and auditory processing issues.

Fetterman addressed "the elephant in the room" at the outset of the debate, admitting that because of his ongoing recovery, “I might miss some words in this debate, mush two words together.” Indeed, Fetterman, who utilized closed captioning to view questions, struggled with combating Oz's attacks in a rapid-fire format poorly suited to his vulnerabilities. 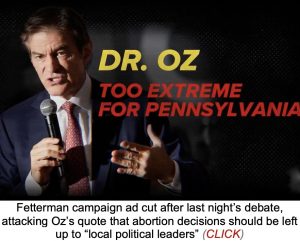 By contrast, Oz, a former national television personality, was polished and at ease in front of the camera, attempting to paint himself as a moderate, problem-solving surgeon.

Although Oz fully embraced the support of former President Donald Trump, which helped propel him to a narrow victory in the May 17 Republican primary, he has since toned down his MAGA bona fides and conservative messaging in the general contest.

Like other GOP candidates nationwide, Oz focused on the issue of crime and the "wave that that’s been facilitated by left, radical policies like the ones John Fetterman has been advocating for.”

Fetterman stumbled over his support of fracking -- a method of extracting natural gas that employs tens of thousands of people in Pennsylvania - which he once opposed.

Nevertheless, the Lieutenant Governor held his own on certain issues, successfully tying his recovery to access to health care and family leave. In advocating for raising the federal minimum wage to $15 per hour, he questioned how Oz, "an out-of-state phony and a fraud" who is worth an estimated $200 million and owns “10 gigantic mansions,” can relate to a living wage. 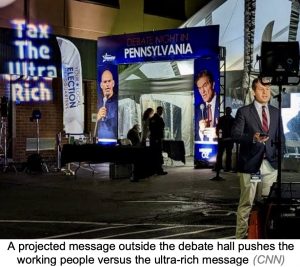 It was Oz's self-inflicted wound on the subject of abortion, however, that dominated the discourse coming out of the debate. Oz said that there should be no role for the federal government on the issue but that he was open to state-level restrictions, saying that the decision should be left to “women, doctors, local political leaders.”

Fetterman accused Oz of "rolling with Doug Mastriano,” the Republican nominee for governor, who supports banning abortion beginning at six weeks with no exceptions, and who is trailing significantly in most polls.

Typically, debates do not have a significant influence on the outcome of an election, but with control of the US Senate hanging in the balance, Democrats are hoping that Oz's abortion gaff will outweigh Fetterman's rocky performance.

If nothing else, it motivated donors. In the three hours following the debate, the Fetterman campaign raised more than $1 million.

Over 650,000 Pennsylvanians have cast their ballots in early voting which began September 19th.