Round one of the second Democratic presidential debate was a much more disciplined, substantive and passionate event than debate one, providing a voice for all the contenders in a battle that centered on the direction of the Democratic Party. 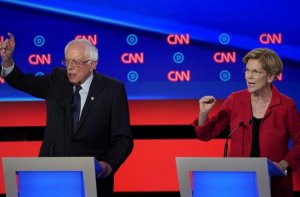 Delaney, Bullock, even Williamson got their moments on the stage as the questioning pitted moderates against the two leading progressives, Warren and Sanders, who shied away from any direct confrontation.

The Highlights
Unlike the first debate, candidates had the opportunity to define themselves through both opening and closing statements, punching their points on everything from the economy, war and gun control, to climate change, race, and, of course, beating Donald Trump.

But the number one topic of the night was unquestionably healthcare, with Sanders and Warren spending much of their time unapologetically defending their shared agenda of Medicare for all, which would create a government-run health insurance plan.

The debate continued to draw contrasts between ideologues vs. pragmatists, several of the self-proclaimed moderates attacked the policy as too extreme, advocating instead for a form of a public option where people could opt in or stick to their private insurance. 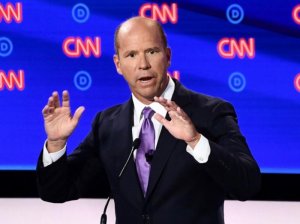 Former Maryland Congressman John Delaney set the tone from the outset, "Folks, we have a choice. We can go down the road that Senator Sanders and Senator Warren wanna take us with...impossible promises that'll turn off independent voters and get Trump reelected."

One of the more heated exchanges was between Senator Bernie Sanders and Ohio Congressman Tim Ryan on forcing union members to give up their private healthcare plans under Medicare for All.

Sanders: "Medicare for All is comprehensive. It covers all healthcare needs. For senior citizens it will finally include dental care, hearing aides and eye glasses.
Ryan: "You don't know that Bernie."
Sanders: "I do know that. I wrote the damn bill." 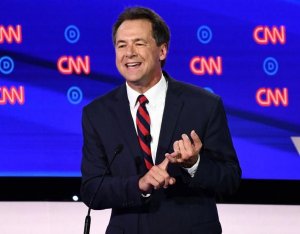 Ryan: "These union members are losing their jobs. Their wages have been stagnant... The only thing they have is possibly really good health care. And the Democratic message is going to be...the only thing you have left, we are going to take it and we're going to do better. I don't think that is a recipe fo success for us. It's bad policy and it's certainly bad politics."

Former Colorado Governor John Hickenlooper, at one point mocking Sanders trademark hands in the air, said, "if we are going to force Americans to make these radical changes, they are not going to go along with it. (go ahead) Throw your hands up!" Hickenlooper also said that Sanders' socialist policies will "FedEx the election to Donald Trump."

Montana Governor Steve Bullock, determined to make a mark in his first debate performance, said, "I am not going to support a plan that rips away quality healthcare from individuals. This is an example of wishlist economics...It used to be Republicans that wanted to repeal and replace. Now many Democrats do as well."

Former Congressman Beto O'Rourke also weighed in on healthcare, saying voters were being "offered a false choice." O'Rourke offered "a better path," saying "When we listen to the American people -- and this is what they want us to do -- they want everyone covered, but they want to be able to maintain choice." 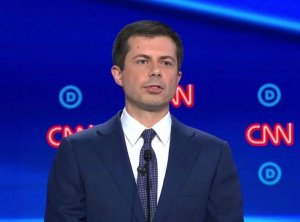 Warren scored her biggest round of applause with her response to a Delaney comment that "Democrats win ...when we run on things that are workable, not fairy tale economics."

"I don't understand why anybody goes to all the trouble of running for President of the United States just to talk about what we really can't do and shouldn't fight for."

Warren continued, "Our biggest problem in Washington is corruption. It is giant corporations that have taken our government and that are holding it by the throat. And we need to have the courage to fight back against that. And until we're ready to do that, it's just more of the same. Well, I'm ready to get in this fight. I'm ready to win this fight."

South Bend Mayor Pete Buttigieg, who is the youngest candidate in the race at 37, interlaced that reminder throughout the evening, "We are not going to be able to meet this moment by recycling the same arguments, policies, and politicians that have dominated Washington for as long as I have been alive."

On the "naked racism in the White House" he said, "If you are watching this at home and you are a Republican Member of Congress, consider the fact that when the sun sets on your career, and they are writing your story ... the thing you will be remembered for is whether in this moment, with this president, you found the courage to stand up to him or continued to put party over country." 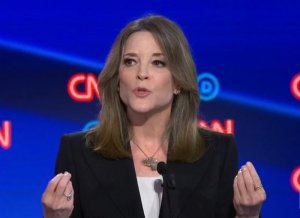 On the subject of racism, author Marianne Williamson scored perhaps the biggest applause lines of the night, "This is part of the dark underbelly of American society. The racism, the bigotry, and the entire conversation that we are having here tonight. If you think this wonkiness is going to deal with this dark psychic force of the collectivized hatred that this president is bringing up in this country, then I am afraid the Democrats are going to see some very dark days."

Tonight's Debate
Tonight's debate is likely to surpass the first night viewership, with frontrunner Joe Biden in center stage, joined by a much more diverse contingent of contenders.

March 3, 2022 In the nation’s first state primary of 2022, and Texas’ first election using the state’s new Republican-drawn political map, the results are far from over, with a...