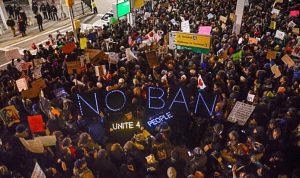 Protesters at JFK Airport in January

The order, which was issued just one week after Trump's inauguration, and without coordination or warning to any of the enforcing government agencies, caused unprecedented chaos and protests in airports and cities nationwide.

An onslaught of legal suits ensued and, on February 9th, the US Court of Appeals for the Ninth Circuit ruled the ban was unconstitutional and issued a nationwide injunction freezing it's implementation.

But the nuanced directive, which would still have banned travelers from Iran, Libya, Somalia, Sudan, Syria, and Yemen from entering the US for 90 days, and all refugees for 120 days, was rejected by the US Court of Appeals for the Fourth Circuit on May 25th.

The Trump Administration appealed to the US Supreme Court and today, June 26th, the high court agreed to stay, or lift, part of the lower court's injunctions, allowing a ban on "foreign nationals who lack any bona fide relationship with a person or entity in the United States."

The justices, however, instructed that the executive order "may not be enforced against foreign nationals who have a credible claim of a bona fide relationship with a person or entity in the United States." 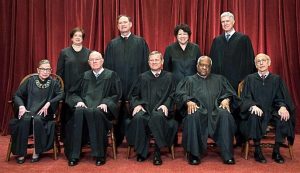 The decision by the justices is a temporary ruling, however, in response to the Administration's request to stay the lower court's ruling while the case moves forward.

The High Court will hear the full case in October of 2017, when they reconvene for their next session.

in the interim, the decision on who has a "bona fide" claim to travel to, or stay in, the United States will be left to the Department of Homeland Security (DHS) and the Department of State (DOS) - leaving thousands still in limbo as to their long-term future.

The only Republican presidential candidate to fully embrace Climate Change has suspended his campaign.