On Wednesday, the US Supreme Court dealt a blow to Republican voter suppression efforts by refusing to reinstate a restrictive North Carolina law that would have have required voters to produce a photo ID at the polls.

The earlier law not only required photo IDs but eliminated same-day registration, prevented voters from casting ballots in the wrong precinct and significantly cut the number of early-voting days.

The 4th U.S. Circuit Court of Appeals struck down as unconstitutional the state's efforts to "target African Americans with almost surgical precision."

In July the 4th US Circuit Court of Appeals struck down the 2013 restrictions as excessive and unconstitutional, citing that the state had "failed to identify even a single individual who has ever been charged with committing in-person voter fraud in North Carolina."

The court also found that the early voting restrictions proposed by the law had a much larger effect on black voters, who "disproportionately used the first seven days of early voting." 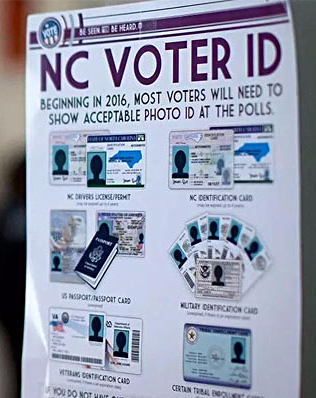 In fact, the only evidence of fraud found by the court was with absentee voting by mail, which the state legislature had exempted from the photo ID requirement - and is used disproportionately by white people.

SCOTUS & Voting Rights
The state GOP's effort in 2013 was one of many nationwide that followed a 5-to-4 US Supreme Court decision (Shelby County vs Holder) that same year which struck down Section 4b of the Voting Rights Act of 1965, weakening federal oversight of voting rights by giving states the right to impose restrictions without federal pre-clearance.

Yesterday's decision by the Supreme Court to reject the challenge to the 4th Circuit's ruling is hailed as a win for voting-rights advocates who say the 2013 law disproportionately impacted minority, poor and elderly voters.

"This decision opens the door for fair and full access to the democratic process for all voters. Hundreds of thousands of North Carolinians will now be able to vote without barriers. The voting booth is the one place where everyone is equal and where we all have the same say."
- Allison Riggs, a lawyer for the Southern Coalition for Social Justice

Election Day is 68 days out! DemList will continue to keep you informed.