Last Friday. the Supreme Court of the United States (SCOTUS) ruled that the Texas "heartbeat law," which bans abortions after six weeks, can stay in place, while allowing abortion providers a narrow path to challenge the extremist legislation in court.

Senate Bill 8, the "Heartbeat Act," is the strictest abortion law in the country. It bans abortion as soon as cardiac activity is detectable, usually around six weeks, before most women know that they are pregnant. The bill allows no exceptions for rape or incest, forcing even minors to bring a pregnancy to full term. 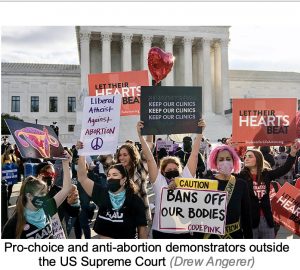 SCOTUS' decision came just over a month after the justices heard the first oral arguments in Dobbs v. Jackson Women's Health Organization, a case that represents the greatest threat yet to a women's right to abortion since it was legalized by the Court almost fifty years ago.

That Dobbs case is a direct challenge to the 1973 precedent Roe v. Wade, which established that states could not ban abortions before fetal viability. That core ruling was upheld in the 1992 case Planned Parenthood v. Casey, albeit in a weaker form that enabled states to enact restrictions short of outright bans.

The question before the Court in Dobbs, a decision on which is not expected until June or July, is whether all pre-viability prohibitions on elective abortions are unconstitutional.

In the interim, Friday's decision by SCOTUS on the Texas law provides insight into the minds of the justices, if not the attempts by some to set the stage on the overturning of Roe next summer -- just months before the midterm elections. 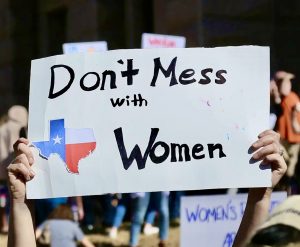 The "Heartbeat Act," originally passed by Texas' GOP-controlled legislature and signed into law by Republican Governor Greg Abbott in May, is the first of its kind to be permitted in any state since the Supreme Court's landmark 1973 decision in Roe v. Wade, which legalized abortion nationwide.

On September 1st, the same day S.B.8 went into effect, the Supreme Court, by a 5-4 vote, denied an emergency request by Texas abortion providers to block enforcement of the law, effectively ending all legal abortion care in the Lone Star State.

While other states have attempted similar "heartbeat" bills, they have been found to be at odds with the Supreme Court's precedents of the constitutionally-protected right to an abortion, established in Roe and Casey.

In an end-run around the Supreme Court and the constitutional precedent, the law allows public citizens to bring civil lawsuits against abortion providers or anyone else found to "aid or abet" illegal abortions. The lawsuits would not be against the women having the abortion, but against anyone including counselors, friends who finance an abortion, or even an individual who drove a woman to the appointment. 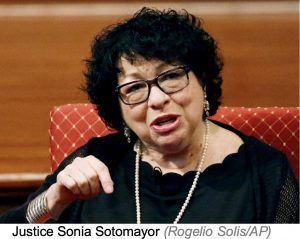 The Decision
In Whole Woman’s Health v. Jackson, the providers returned to the court in the fall, asking the justices to weigh in on the law’s private-enforcement mechanism. The justices agreed in late October to take up their case along with the Biden administration’s challenge to the law, United States v. Texas.

The court voted 5-4 to let the Texas law stand, while returning the providers’ case, Whole Woman’s Health v. Jackson, back to the lower courts with limited options.

In the decision, Judge Neil Gorsuch, who was joined by fellow conservative justices Clarence Thomas, Samuel Alito, Brett Kavanaugh, and Amy Coney Barrett, ruled the providers could not proceed with lawsuits against the state judges, clerks or State Attorney General Ken Paxton, since these officials lack the authority to enforce S.B.8.

The court ruled, however, that the providers’ lawsuit could go forward against medical licensing state officials, along with the head of the Texas health department, since those officials would play a role in bringing disciplinary actions against providers if they violated S.B.8.

While the Constitution limits lawsuits against states themselves, the court has for more than a century allowed lawsuits alleging violations of constitutional rights to proceed against state officials.

"The Court’s dangerous departure from its precedents, which establish that federal courts can and should issue relief when a State enacts a law that chills the exercise of a constitutional right...the Court effectively invites other States to refine S.B. 8’s model for nullifying federal rights." - Justice Sonia Sotomayor 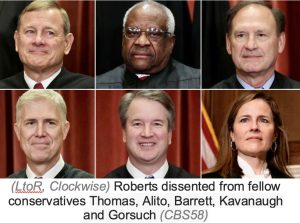 in his dissent, Chief Justice John Roberts, who was joined by liberal justices Stephen Breyer, Sonia Sotomayor and Elena Kagan, warned that the decision presents a threat to the rule of law and the Constitution, not just in Texas but also nationwide.

On S.B.8 more broadly, Roberts observed that its “clear purpose and actual effect has been to nullify this Court’s rulings.” Quoting ominously from an 1809 ruling, Roberts said, "'If the legislatures of the several states may, at will, annul the judgments of the courts of the United States, and destroy the rights acquired under those judgments, the constitution itself becomes a solemn mockery.'”

Roberts added, "The nature of the federal right infringed does not matter; it is the role of the Supreme Court in our constitutional system that is at stake.”

In a separate, unsigned order, the justices dismissed a challenge to the Texas law brought by the Biden Administration, sending it back to the lower courts, saying a review by the High Court had been "improvidently granted."

Although some hope lies in the district court overseeing S.B.8 challenges, it is unlikely they will survive scrutiny by the ultra-conservative US Court of Appeals for the 5th Circuit. 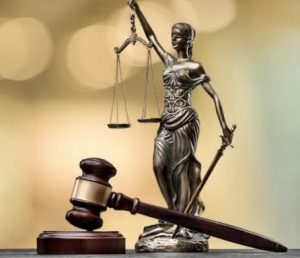 Justice Sotomayor, saying “The Court should have put an end to this madness months ago, before S.B.8 first went into effect,” warned of the consequences. “This is no hypothetical. New permutations of S.B.8 are coming. In the months since this Court failed to enjoin the law, legislators in several states have discussed or introduced legislation that replicates its scheme to target locally disfavored rights.”

The justice was correct. On Saturday, California Governor Gavin Newsom (D), expressing his "outrage" at the Supreme Court's decision to allow the Texas abortion ban to remain in effect, said he would use similar legal tactics to tackle gun control in his state.

December 1, 2020 True to his word that his administration will “look like America,” President-elect Joseph Biden’s latest Cabinet nominees and senior staff announcements add to...

July 14, 2020 Now 112 days away from the 2020 presidential election, the electoral college map is looking good for Democratic hopes of retaking the White House. According to an analysis...