Several key decisions are expected in the coming months as the Supreme Court of the United States (SCOTUS) enters the final phase of its 2020-2021 term.

Among the high-profile cases this term are disputes over abortion, immigration, voting rights, LGBTQ rights, and the Affordable Care Act.

The high court normally sits in May and June only to announce orders and opinions.

The Court
This is also the first term for Justice Amy Coney Barrett, who was confirmed on October 26, 2020 to fill the seat vacated by the late Justice Ruth Bader Ginsberg, who passed just eight days before Barrett's nomination. 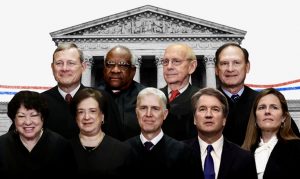 Trump previously seated Associate Justices Brett Kavanaugh in October of 2018 and Neil Gorsuch in April of 2017. The other conservatives include Samuel Alito and John Roberts, both appointed by George W. Bush, and Clarence Thomas, appointed by George H.W. Bush.

On The Docket
Over the course of the full term, the Court hears more than 60 cases, and announces a majority of its decisions in June. As of April 5, 2021, the court had issued opinions in just 26 cases this term.

The term began with a flurry of decisions in late October 2020 regarding challenges to election law, ballot-counting and voting rights in key battleground states in a last-ditch effort by the Trump administration to reverse the course of the election.

Although those cases sensitive to the timing of the election were largely unsuccessful, there is still a hangover of cases from the Trump era which, as adjudicated by a solid conservative majority, remain a significant threat to individual liberties and protections. 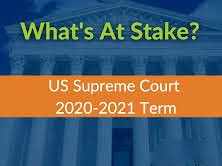 In late November, under the new court including Justice Barrett, SCOTUS ruled against New York's executive order limiting attendance at religious services in order to prevent the spread of COVID-19.

The decision in Roman Catholic Diocese of Brooklyn v. Cuomo, considered one of the most significant religion cases of the past three decades, represented a shift from a precedent of preserving equality between secular and religious individuals, to prioritizing special advantages to people of faith. Previously, religious objectors typically could not seek exemptions from the law if granting them an exemption could harm people who do not share their faith.

In Fulton v. City of Philadelphia, argued on November 4, 2020, the Court will rule on a case brought by Catholic Social Services (CSS), a government contractor that claims a constitutional right to refuse services to same-sex couples while still receiving government funds. CSS claims its policy of refusing to place children in the homes of gay and lesbian couples is protected under religious liberty.

In Brnovich v. Democratic National Committee, argued on March 2, 2021, the Court will decide whether Arizona's policy of discarding all votes cast outside of the appropriate precinct and Arizona's 2016 law H.B. 2023, which criminalizes the collection and delivery of another person's ballot, violate either the Voting Rights Act or the Fifteenth Amendment.

In the case of California v. Texas, argued on November 10, 2020, the Supreme Court will decide whether the Affordable Care Act's individual mandate is now unconstitutional and therefore invalidates the entire legislation. 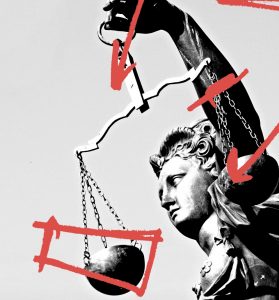 In Mayorkas v. Innovation Lab, the Court will rule on the legality of the Trump administration's policy of requiring some asylum seekers to remain in Mexico while their immigration requests are handled by the courts.

In Cedar Point Nursery v. Hassid, argued March 22, 2021, SCOTUS will rule on whether organizers from the United Farm Workers union illegally entered Cedar Point Nursery premises without providing written notice ahead of time. Cedar Point claims the "taking" of property is a violation of the Fifth Amendment, while the union claims temporary visits for the purposes of inspection are legal under California's Agricultural Labor Relations law.

Last month, the Court agreed to hear Cameron v. EMW Women's Surgical Center, which will decide whether Kentucky Attorney General Daniel Cameron has the right to defend a 2018 state ban on a common abortion method known as dilation and evacuation, despite the ban having been struck down by federal courts.

The role of the judiciary was heightened considerably under former President Trump as a tool for both challenging and defending our constitutional rights. With the narrow partisan split in Congress, Republican efforts to roll back those freedoms via the courts are not expected to diminish.

We may have won the White House, but the fight is far from over.