The Supreme Court of the United States (SCOTUS) heard oral arguments Wednesday in a case that represents the greatest threat yet to a woman's right to abortion since it was legalized under the Court's 1973 Roe v. Wade decision.

Based on two hours of presentations and debate, the justices seemed poised to uphold a Mississippi law that bans abortions after 15 weeks of pregnancy, potentially rolling back abortion rights the court has otherwise reaffirmed over the last 50 years.

On October 27, 2020, Justice Amy Barrett was sworn in as the third Trump appointee to the High Court, solidifying its concrete 6-3 conservative majority.

The conservative shift on the Supreme Court under Trump emboldened Republican state legislatures to enact hundreds of abortion restrictions and bans in hopes of taking their cases to the US Supreme Court. 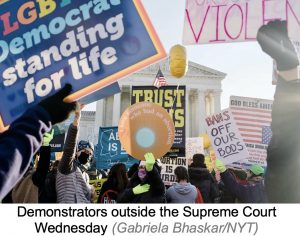 At Issue: Whether all pre-viability prohibitions on elective abortions are unconstitutional.

On March 18, 2018, the Jackson Women’s Health Organization, a clinic and the only licensed abortion facility in Mississippi, challenged the constitutionality of the "Gestational Age Act" in federal court. The newly-enacted law, passed by the GOP-controlled legislature and Governor, and which went into effect that day, banned abortions after the fifteenth week of pregnancy.

The US District for the Southern District of Mississippi ruled in favor of the clinic, holding that the law was unconstitutional, and put a permanent stop to the law's enforcement. On appeal, the United States Court of Appeals for the Fifth Circuit affirmed the district court's ruling.

The state of Mississippi appealed to the US Supreme Court, using the case as a direct challenge to Roe v. Wade.

Under the Supreme Court's landmark 1973 decision in Roe v. Wade, the court said states could not ban abortions before fetal viability, the point at which the fetus can survive outside the womb, at around 24 weeks. 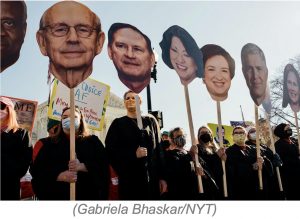 The case was the first to establish abortion as a fundamental right protected by the Due Process and Liberty Clauses of the Fourteenth Amendment.

Roe was significantly weakened In 1992, in a bitter 5-4 decision by the US Supreme Court in Planned Parenthood v. Casey.

While the Court preserved what it called Roe’s “essential holding” -- that women have a constitutional right to terminate their pregnancies until fetal viability -- it discarded the trimester framework in favor of a viability analysis, thereby allowing states to implement abortion restrictions that apply during the first trimester of pregnancy.

The Court also replaced the strict scrutiny standard of review required by Roe with the undue burden standard, under which abortion restrictions would be unconstitutional when they were enacted for "the purpose or effect of placing a substantial obstacle in the path of a woman seeking an abortion of a nonviable fetus." 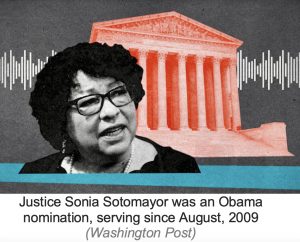 Now, in the most consequential decision since Casey, the Supreme Court is confronted head-on with the question of overturning Roe entirely, which would open up the decision to individual states to decide whether and when to ban abortions.

The justices spent months deciding whether or not to take the case, underscoring the deep divisions on the bench -- which was evident in their questioning.

Justice Sotomayor was the most vociferous, saying "The newest ban that Mississippi has put in place, the six-week ban, the Senator sponsor said 'We're doing because we have new justices on the Supreme Court.' Will this institution survive the stench this creates in the public perception that the constitution and its reading are just political acts? I don't see how it is possible."

Justice Stephen Breyer pressed Mississippi’s lawyer, Scott Stewart, on the dangers of overruling a longstanding precedent after changes in the membership of the court. Quoting from Casey, Breyer said, “To overrule under fire in the absence of the most compelling reason to re-examine a watershed decision would subvert the court’s legitimacy beyond any serious question.” 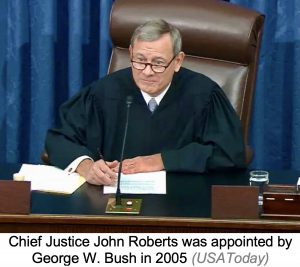 Any hope of saving Roe rests with Chief Justice John Roberts and whether, as chief negotiator, he can persuade any of his fellow conservatives to adopt a narrower approach, one upholding the Mississippi law but not explicitly overruling Roe.

Roberts has previously cited respect for stare decisis, the legal doctrine that obligates courts to follow historical cases when making a ruling on a similar case, while also opening the door to an incremental approach.

On Wednesday, Roberts repeatedly questioned whether the viability line -- the standard that allows abortions up to 22-24 weeks -- was crucial and whether it was an integral part of Roe. His point, it seemed, was that the court could move the line without overruling Roe.

Justice Brett Kavanaugh, however, said that some precedents deserved to be overruled. “If you think about some of the most important cases, the most consequential cases in this court’s history, there’s a string of them where the cases overruled precedent,” he said, listing several, notably Brown v. Board of Education, which barred segregation in public schools.

Justice Amy Coney Barrett asked a question suggesting that a ruling overturning Roe would not have a ripple effect on rulings on the right to privacy or gay rights. She also asked questions about the availability of adoptions. 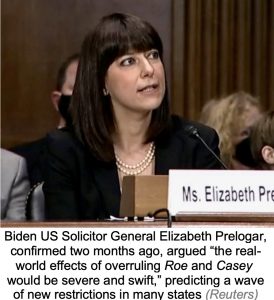 The Court's three most conservative members, Justices Samuel Alito, Clarence Thomas and Neil Gorsuch appeared prepared to overrule Roe entirely. On the issue of viability, Alito emphasized that “the fetus has an interest in having a life.”

Justice Clarence Thomas, the only member of the high court who has openly called for overturning Roe, asked Jackson Women’s Health Organization attorney Julie Rikelman, what constitutional right protects abortion: "Is it privacy? Autonomy? What would it be?"

"It’s liberty," she replied. "It’s the textual protection in the 14th Amendment that the state can’t deny someone liberty without the due process of law."

While the Supreme Court starts its term on the first Monday in October, it does not announce its decisions until June or July, just prior to its Summer recess.

That means the decision as to whether women will have the right to self-determination over their own bodies won't be announced until just months before the 2022 midterm elections.

Recent polling shows that a vast majority of Americans, between 85%-90%, think abortion should be legal in at least some circumstances. On Roe v. Wade, a November 17-19, 2021 poll conducted by YahooNews/YouGov found that more than twice as many Americans, 55%, want the court to reaffirm Roe, as opposed to just 24% who want to see it overturned.

Related
DemDaily: SCOTUS: Decisions On The Docket 10/5/21
DemDaily: The Road to Overturning Roe 9/2/21

May 2, 2018 On Tuesday Director of the Consumer Financial Protection Bureau, Mick Mulvaney, gave a group of banking industry executives what he felt to be sage advice on dealing with lawmakers...

October 14, 2020 While the Senate Judiciary was conducting confirmation hearings this week for the US Supreme Court’s likely next jurist, the current court was delivering a victory to the...