While the Senate Judiciary was conducting confirmation hearings this week for the US Supreme Court's likely next jurist, the current court was delivering a victory to the Trump administration, granting its request to halt the 2020 census count ahead of schedule.

Although the decision only temporarily ceases the count while appeals move forward in federal court, it realistically means the end to the normally non-political process, ensuring the undercounting and underfunding of future resources to underprivileged sectors of our population. 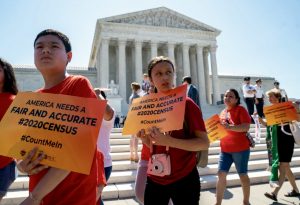 As is typical with emergency applications, there was no signed brief by court, but Justice Sonia Sotomayor issued a dissent, saying that "the harms associated with an inaccurate census are avoidable and intolerable."

Why The Census Is Important
An accurate census count is important because it is the key to political and economic empowerment for every community across the United States.

The recorded census numbers are used to redraw or "redistrict" proportionate congressional districts, which affects the makeup of Congress for the next ten years, including the number of seats and electoral college votes each state is allocated.

Inaccurate data would also affect funding decisions that are made, based on census numbers, in allocating $675+ billion per year in federal, state and local funds for schools, roads, child-care centers and senior centers. Funding for healthcare facilities, hospitals and programs is also directly linked to the census.

Weaponizing the Census
The litigation is just the latest in a series of unprecedented attempts by Trump to weaponize the normally nonpartisan, data-driven process to the advantage of his party and his policies.

Most notable was the administration's attempt to intimidate undocumented immigrants in the count by trying to add a citizenship question on the 2020 Census.

In March of 2018, Trump's Department of Justice (DOJ), under then-Attorney General Jeff Sessions, requested the addition of the question, last used in 1950, claiming it was needed to address suspected voter discrimination and to enforce voting rights. 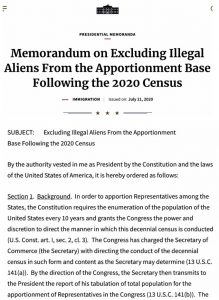 Numerous states filed suit, claiming it would suppress participation by immigrants and non-citizens who would distrust the confidential use of the information provided, resulting in inaccurate data on minority communities.

In January, 2019 US District Court Judge Jesse M. Furman ruled that adding the question was "arbitrary and capricious," and an "egregious" violation of the Administrative Procedure Act.

In July, 2019, the US Supreme Court ruled against adding the question, citing as "pretext" the administration's reasoning under the Voting Rights Act.

Following the ruling, Trump directed the Commerce Department, which oversees the Census Bureau, to collect other government data on citizenship, and in a memo, ordered Commerce Secretary Wilbur Ross to present him with two separate counts: one of the entire population and a second that excludes "aliens who are not in a lawful immigration status."

The Bureau moved the deadline for completing the count from August 14, 2020 to October 31, 2020, which meant that delivery of the final figures to the president would not take place until April 30, 2021, and the redistricting data would be delivered to the states no later than July 31, 2021. 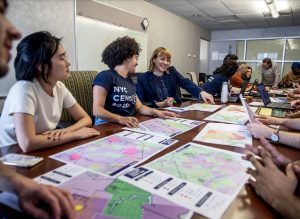 In August, however, Commerce Secretary Ross ordered the October 31st deadline moved up a month to September 30th, saying the extra time was needed to deliver preliminary population totals to President Trump by the statutory deadline of December 31, 2020.

Reverting to the December deadline would ensure that President Trump controls that process, regardless of the outcome of the election.

The National Urban League, the League of Women Voters and other groups filed suit, saying the compacted schedule would undermine the accuracy of the census, and the US District Court in the Northern District of California agreed, reinstating the October 31st extension and suspended the December 31st statutory deadline for submitting the results.

The US Court of Appeals for the Ninth Circuit denied an appeal from the Trump administration to stay the District Court's order, but said it would not bar the administration from trying to comply with the December 31st reporting deadline.

The Trump administration appealed to the US Supreme Court for "immediate relief," arguing the shortened deadline constituted "an unprecedented intrusion into the executive's ability to conduct the census according to Congress's direction," which itself had not extended the December 31st deadline.

SCOTUS ruled the deadline is now 11:59 pm on October 15th, although census experts have reported that, prior to the decision, field operations were already being shut down.

You can still be counted! Go to: my2020census.gov

SignUp for the Daily updates on the issues, politics and the players
Follow DemList on Facebook, Twitter and LinkedIn
DemList relies primarily on individual contributions to support our work.
Sources: New York Times, CNN, NBC, US Supreme Court

September 8, 2022 The Democratic National Committee (DNC) is holding its Summer meeting this week, its bi-annual gathering to address party business, reports, resolutions and strategy going into...