In the wake of Attorney General William Barr's brief teaser on the Mueller report, and his independent conclusion that the Trump Campaign had not "conspired or coordinated with the Russian government in its election interference activities," the President and Republicans are seizing the opportunity to attack. 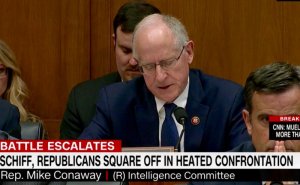 On Thursday, the nine GOP members of the House Intelligence Committee called for the resignation of Committee Chair Adam Schiff (D-CA).

The statement, read by Congressman Mike Conaway (R-TX), accused Schiff of being "at the center of a well-orchestrated media campaign claiming, among other things, that the Trump campaign colluded with the Russian government."

Conaway read a litany of accusations, including leaking information and Schiff's purported "willingness to continue to promote a demonstrably false narrative." 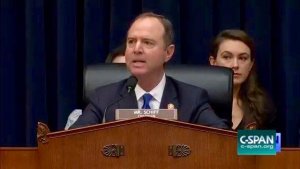 The move was a symbolic one as Democrats, following the 2018 midterm electons, have majority control of the US House, the committee chairpersonships, and, hence, the votes. It was, nevertheless, a public attempt to try to discredit Schiff, who is among Trump's chief rivals in investigating the president's actions.

Before a raucous crowd in Michigan last night, Trump falsely claimed that he had been exonerated, despite the fact that the full 400-page Mueller report has not been released. A redacted version is now expected by mid-April. 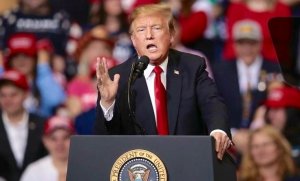 The President berated "little pencil-neck Adam Schiff," adding, "He has the smallest, thinnest neck I have ever seen. He is not a long ball hitter."

America may have already lost its way.

SignUp for the Dailys!