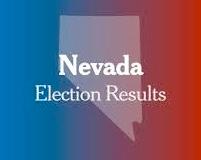 As anticipated, the Vermont Senator swept the night. With 100% of the vote reported as of this morning, Sanders had 46.8% of the county convention delegates - Nevada's determinant of the winning candidate.

Pete Buttigieg finished third after Joe Biden, but Warren, Klobuchar and Steyer fell below the 15% voter threshold necessary to win delegates. No doubt a disappointment for Klobuchar after her third place finish in New Hampshire.

Also a blow for Warren, whose strong debate performance on February 19th garnered her $9 million dollars in three days, but came too late for a state that had already cast more than half of its ballots ahead of Saturday's vote.

Although Biden claimed second place, it was a distant one with less than half of Sanders' vote totals. He is relying on a win in the February 29th South Carolina primary, and his popularity among African American voters, to regain his footing in the race. 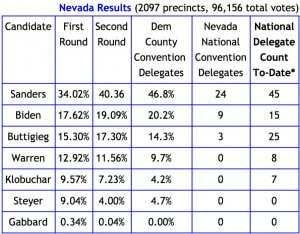 The Results
Nevada reports four sets of results:
1) The initial first round vote at each caucus,
2) The second round vote numbers after supporters realigned behind those who reached the 15% threshold for continuing, and
3) The county convention delegates.
In Nevada, each of its 2000 precincts is awarded a certain number of county convention delegates based on the number of registered Democrats in that precinct. That means in each precinct, the delegates are split among the final viable candidates proportionate to the final vote total.

4) The number of pledged national convention delegates each of the candidates will receive from a pool of 36 allocated to Nevada (The national delegate numbers allocated have not been certified by the Nevada Democratic Party and *on the total count, one Iowa Delegate has yet to be allocated, pending a recanvas).

A Diverse Electorate
Nevada was also the first test of candidates before a racially-diverse electorate, where, according to NBC entrance polls, one in three caucus-goers were people of color. 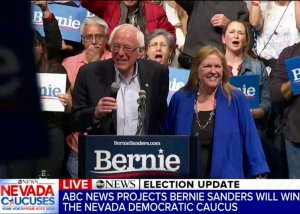 Despite opposition to Sanders by the powerful 60,000-member Las Vegas Culinary Union, which is roughly 50% Hispanic, Sanders received an estimated 51% of the Hispanic vote. Biden had 17%.

The early preference poll showed Biden taking 39% of the African American vote, half of which said they are either moderate or conservative. Sanders had 27%.

Buttigieg has called into question results in 200 precincts, but has not yet initiated the recount protocol required by the Nevada Democratic Party.