US Senator Bernie Sanders suspended his campaign for President this morning, saying, "While our movement has won the ideological battle," he recognizes the path to the Democratic nomination is "virtually impossible."

"I cannot in good conscience continue to mount a campaign that cannot win and which would interfere with the important work required of all of us in this difficult hour" said Sanders. 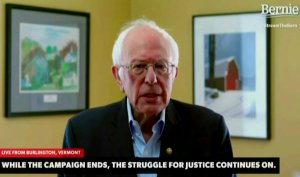 A Shared Vision
In an eloquent address, Sanders thanked, at length, volunteers, contributors, surrogates and staff, saying, "Together we have transformed American consciousness as to what kind of nation we can become, and have taken this country a major step forward in the never-ending struggle for economic justice, social justice, racial justice and environmental justice."

With characteristic tenacity and passion, he spoke to his vision for universal healthcare, decent wages and working conditions, education and a clean environment. He spoke of a shared belief that we, as human beings, "are entitled to live in a world of justice, democracy and fairness, without racism, sexism, homophobia, xenophobia or religious bigotry."

"Let me say this very emphatically. As you all know, we have never been just a campaign. We are a grass-roots, multiracial, multigenerational movement which has always believed that real change never comes from the top on down, but always from the bottom on up. We have taken on Wall Street, the insurance companies, the drug companies, the fossil fuel industry, the military-industrial complex, the prison-industrial complex, and the greed of the entire corporate elite. That struggle continues."

Since first launching his presidential aspirations over five years ago, the Vermont Senator has built a significant 50-state network through Our Revolution, the grassroots organization he founded in the aftermath of the 2016 presidential election. His influence and impact is credited with moving the Democratic Party to the left. 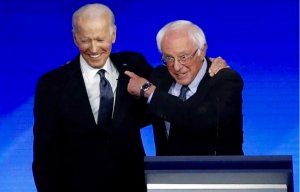 The Caveat
In shades of 2016, however, Sanders came short of formally endorsing Biden in today's endorsement and there was no call to his supporters to unite behind the presumptive nominee. After losing the nomination to Hillary Clinton four years ago, Sanders' less than full-throated endorsement of her candidacy drew criticism and accusations by some that it cost her the White House.

While the Vermont Independent acknowledged Biden as the party's 2020 nominee, saying he is "a very decent man who I will work with to move our progressive ideas forward," it was not without a caveat.

After officially congratulating Biden, Sanders said that, "on a practical note," he will stay on the ballot in all remaining (primary) states... to assemble as many delegates as possible at the Democratic convention, where we will be able to exert significant influence over the party platform and other functions."

The Presumptive Nominee
In a statement released this afternoon, former Vice President Joe Biden praised Sanders, saying "Bernie has done something rare in politics. He hasn't just run a political campaign, he's created a movement. And make no mistake about it, I believe it's a movement that is as powerful today as it was yesterday. That's a good thing for our nation and our future."

In an email this afternoon, Democratic National Committee (DNC) Chair Tom Perez said, "Senator Sanders and his campaign have strengthened the Democratic Party with their energy, ideas, and leadership, and we need them to continue helping lead the fight to transform this country.

Now it is time to come together and unite around our presumptive nominee...Today marks the first day in what will be nothing short of the fight of our lifetimes."