Donald Trump's public flirtation with Russia throughout the presidential election has become a matter of serious concern as the now President-elect continues to play a questionable, if not dangerous, public game with our international relations.

From his first public invitation to Russia during the campaign to "find the 30,000 (Clinton) emails that are missing," to his praise of Russian President Vladimir Putin as one who has been "a leader far more than our president," Trump has continued to show a seemingly ignorant deference to the Federation.

Seventeen US Intelligence Agencies concluded that the election was "hacked" by the Russians in an attempt "to harm Hillary Clinton's chances and promote Donald J. Trump," followed by a bi-partisan call by Congress for an investigation.

To further compound matters, Trump has nominated as his Secretary of State Exxon Mobile head Rex Tillerson, whose close ties to the Russian government earned him the "Order of Friendship" award from Putin - the top honor bestowed by Russia to foreign citizens.

The Russian connection and actions will, no doubt, be the centerpiece of Tillerson's confirmation hearing, which will begin after Congress is sworn in January 3, 2017.

In the interim, while the country watches this very serious situation unfold, we have Saturday Night Live to keep us amused! 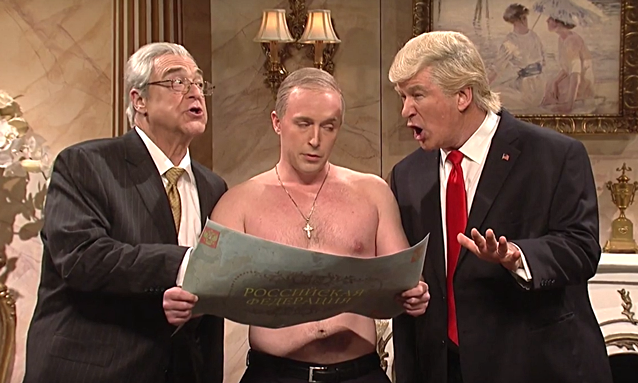 DemList will keep you updated!

Every few months we like to do a humor roundup, to give relief from the fray. Jimmy Kimmel “We don’t have (the show) Scandal on Thursday nights any more, so the president has been...