Montana Governor Steve Bullock threw his hat into the ring yesterday, the 22nd Democratic candidate to announce his candidacy for President in 2020.

STEVE BULLOCK
Although considered a moderate, Bullock, 53, is pro-choice and supports marriage equality, and has been a strong advocate for the environment and about the dangers of climate change. 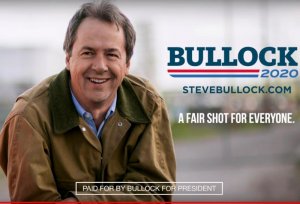 In his announcement Bullock singled out campaign finance as the centerpiece of his message, saying, "We need to defeat Donald Trump in 2020 and defeat the corrupt system that lets campaign money drown out the peoples' voice so we can finally make good on the promise of a fair shot for everyone."

Bullock emphasizes his record of working with the Republican-controlled Montana house and senate, and his ability to win over Republicans in Trump territory. 30% of Montanans who voted for Trump in 2016 also voted for Bullock.

Bullock, who deferred entry into the race until after the close of the Montana legislature, made his formal announcement on Tuesday at Helena High School, his alma mater.

Background
Born in Missoula, Montana, he is the son of Penny Clark, a school board trustee who raised him as a single parent, and Mike Bullock, a teacher and administrator.

He received his undergraduate degree from Claremont McKenna College in California, and a law degree from Columbia Law School in New York. His legal and political career began in 1996, when he served as chief legal counsel to the Montana Secretary of State, and later, in senior positions with the Montana Department of Justice. 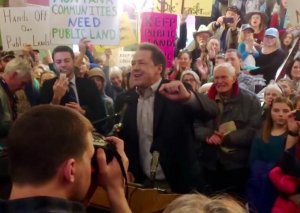 Following a failed bid for the Democratic nomination for state Attorney General in 2000, Bullock worked in the DC law offices of Steptoe & Johnson.

After moving back to Montana in 2004, he practiced labor law before his second, successful bid for Attorney General in 2008, in which he won 52.64% of the vote against Republican Tim Fox.

As Governor, Bullock passed one of the strongest anti-"dark money" laws in the country, and in 2018, he sued the Internal Revenue Service and the Department of the Treasury over the Trump administration's decision to dispense with donor requirements for nonprofit organizations. 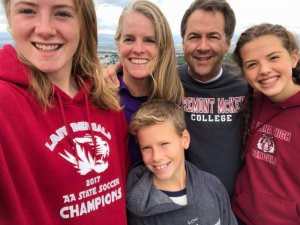 Bullock also expanded Medicaid and became the nation's first Governor to implement net neutrality protections. In 2015 he served as Chairman of the Democratic Governors Association.

Senate Democrats tried unsuccessfully to persuade Bullock to challenge first-term Republican US Senator Steve Daines, in the hopes of making Montana one of three net seats they need to secure the Senate majority in 2020.

Bullock said he would be "more effective" as an executive. Traditionally, Governors are thought to make the best presidents because they have served as administrators rather than those in Congress, who legislate through votes.

The first test of his effectiveness will be reaching the DNC's threshold of raising contributions from 65,000 unique donors in order to make the Democratic debate stage in Miami in six weeks.

August 16, 2020 Nonreligious Americans are young, diverse and the fastest growing “religious demographic” in the country, and, like so many of our partners in civil rights, one under...

November 20, 2018 While House lawmakers await the outcome of their leadership elections next week, Senate Democrats re-elected their party leadership by acclamation during a closed-door caucus...