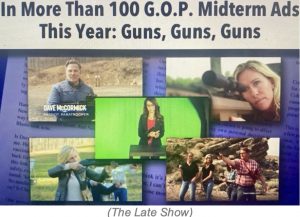 While the nation and the people of Uvalde, Texas are reeling from the tragic Robb Elementary School gun massacre that took the lives of 19 children and two teachers, conservative candidates across the country are running gun-toting television ads touting their loyalty to the right to bear arms.

According to The New York Times, guns have been used in more than 100 television ads from Republican candidates and supportive groups this year.

From brandishing firearms in the name of their conservative credentials to vowing to take on Democrats threatening their "rights" under the second amendment, GOP hopefuls are unabashedly using guns to appeal to their base.

Here is just a sampling of the ads so far this election cycle (click on ads to watch the spots).

Candidate: Incumbent Alabama Governor Kay Ivey
Advertiser: Kay Ivey for AL Governor
Transcript: "...the Second Amendment is sacred. So I passed concealed carry for Alabamians to arm themselves without government interference. That way, you don't know who's got what in their purse -- lipstick, an iphone or maybe a little Smith and Wesson 38."
Democratic Opponent: Yolanda Flowers, Malika Sanders-Fortier (June 21 runoff)

Candidate: Jim Lamon, Candidate for US Senate Arizona
Advertiser: Lamon for Arizona Senate
Transcript: Lamon, clad in a sheriff’s badge and a cowboy hat, faces off in an OK Corral-style shoot-out against "the DC Gang" of President Biden, Speaker Nancy Pelosi and Senator Mark Kelly look-a-likes. Lamon shoots the weapons out of their hands saying, "The good people of Arizona have had enough of you. It's time for a showdown." The ad received backlash since Kelly’s wife, former Congresswoman Gabby Giffords, was a victim of gun violence.
Primary: August 2
Democratic Opponent: Incumbent US Senator Mark Kelly

Candidate: Blake Masters, Candidate for US Senate Arizona
Advertiser: Blake Master for Senate
Transcript: Masters posts a weekly twitter ad demonstrating his intimate, rather creepy love of guns. This one was about his affection for his Walther PPK, the "James Bond gun," and silencers.
Primary: August 2
Democratic Opponent: Incumbent US Senator Mark Kelly 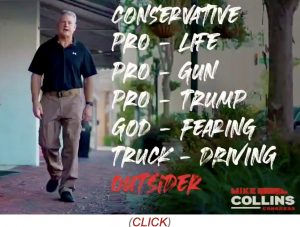 Candidate: Mike Collins, Candidate for Congress Georgia 10th CD
Advertiser: Mike Collins for Congress
Transcript: The ad opens with Collins blowing up a copy of “Nancy Pelosi’s Plan for America” before hopping in a big rig, throwing a football, and firing another assault rifle for good measure, saying “I’m not afraid to say I was pro-Trump from Day One.”
Runoff: Collins is in a June 21 runoff with GOP candidate Vernon Jones.
Democratic Opponent: Tabitha Johnson-Green

Candidate: Garrett Soldano, Candidate for Michigan Governor
Advertiser: Garret Soldano for Michigan Governor
Transcript: The ad starts with a voice aggressively asking, "Who?" and a chorus of people chanting in response "We The People," with scenes of the candidate shooting at a firing range while loud music plays. Viewers are invited to enter a contest to win an AR-15 rifle portrayed in the ad.
Primary: August 2
Democratic Opponent: Incumbent Governor Gretchen Whitmer

Candidate: Dean Heller, Candidate for Governor Nevada
Advertiser: Dean Heller for Nevada Governor
Transcript: Heller is shown with his wife and two daughters during target practice, saying, "Liberals think the second amendment is about hunting. It is, but it is also about protecting your home and your rights."
Primary: August 2
Democratic Opponent: Incumbent Governor Steve Sisolak

Candidate: Ted Budd, Candidate for US Senate North Carolina
Advertiser: Ted Budd for Senate
Transcript: "North Carolina conservative Ted Budd, endorsed by President Trump because he cut taxes and built trump's wall now Ted but is fighting to finish it, securing our border. In the Senate Budd will tackle out of control inflation, unleashing our economy. Did we mention he owns a gun range?"
Democratic Opponent: Cheri Beasley

Candidate: Mehmet Oz, Candidate for US Senate Pennsylvania
Advertiser: Dr. Oz for Senate
Transcript: "When people say I won't support guns, they are dead wrong (shooting gun). I think conservatives know I am strong on the second amendment...(which is) not just about hunting, it is about our constitutional right to protect ourselves -- from intruders or an overly intrusive government."
Primary Recount: The May 17 primary has gone to a recount, with 926 votes separating Oz and David McCormick
Democratic Opponent: John Fetterman

Our first glimpse at the Trump effect on the electorate may come as soon as April when the first of five “special elections” will take place to fill the terms of Members of Congress...