Today, at 3:30pm, President Joe Biden signed the Inflation Reduction Act of 2022, a sweeping $750 billion health care, climate and tax bill -- delivering a triumphant victory for his administration and his party going into the final months of the midterm elections.

The landmark legislation, one of the most consequential pieces of economic policy in recent US history, aims to lower prescription drug costs, address global warming, raise taxes on wealthy corporations and reduce the federal deficit. 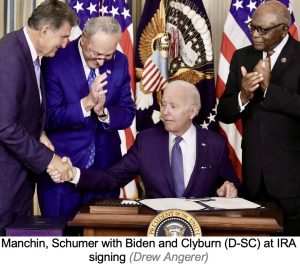 Passed by the US House and Senate along party lines, the bill was delayed by months of internal negotiations among Democrats, ultimately resting, once again, on the vote of moderate Democratic Senator Joe Manchin (WVA). To the shock of even close colleagues, Manchin and Senate Majority Leader Chuck Schumer announced a deal July 27. 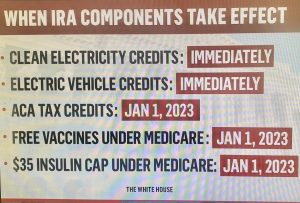 Defeating Special Interests
* $187 million: The amount the Pharmaceutical industry has spent on lobbying in 2022.
* 1,600: number of lobbyists the pharmaceutical companies had in 2021 -- three times the number of Members of Congress.
* 33 years: the amount of time Congressional Democrats have been trying to lower prescription drug costs by allowing Medicare to negotiate drug prices.
* 19 years: number of years Medicare has been blocked from negotiating prescription drug costs 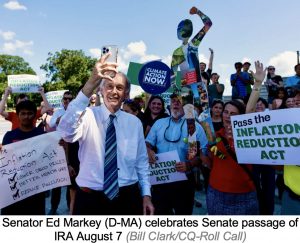 Reducing Harmful Pollution
* Reduce greenhouse gas emissions by about one gigaton in 2030, or a billion metric tons -- 10 times more climate impact than any other single piece of legislation ever enacted.
* Deploy clean energy and reduce particle pollution from fossil fuels to avoid up to 3,900 premature deaths and up to 100,000 asthma attacks annually by 2030.

Taxes
Making the Tax Code Fairer
* $0: how much some of the largest, most profitable corporations pay in federal income tax.
* 55: the number of America’s largest, wealthiest corporations that got away without paying a cent in federal income taxes in 2020.
* $160 billion: how much the top one percent of earners is estimated to evade each year in taxes.
* 15%: the minimum tax on corporate profits the Inflation Reduction Act imposes on the largest, most profitable corporations.
* $124 billion: savings over 10 years the Inflation Reduction Act will generate from collecting taxes already owed by wealthy people and large corporations, according to the Congressional Budget Office.
* And no family making less than $400,000 will see their taxes go up a penny. 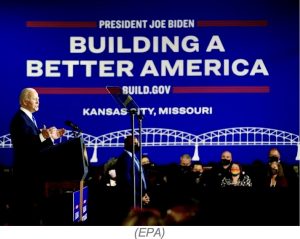 The White House announced that in the coming weeks Biden will meet with the Cabinet regarding implementation of IRA, which will be celebrated at a September 6 White House event. The President and Cabinet members will also embark on a “Building a Better America" tour to promote the benefits of the law to the American people.

Just a reminder to our followers — Democratic presidential candidates Hillary Clinton, Bernie Sanders and Martin O’Malley will square off tonight in their fourth debate