Alabama is poised to enact the most restrictive anti-abortion law in the country, one of a series of bills passed by states this year with the deliberate intent of setting up a challenge to Roe v Wade that would end up before the US Supreme Court.

Alabama has a trifecta government, with the Republican party controlling both legislative chambers and the Governor's mansion.

In tomorrow's vote, the Alabama legislature is expected to pass the Alabama Human Life Protection Act that would make it a felony for a doctor to perform or attempt an abortion during any state of pregnancy - essentially banning abortion, including in cases of rape or incest. 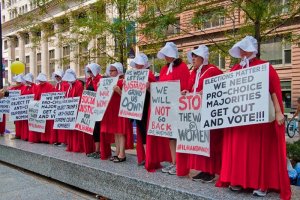 "Handmaids" protest Alabama bill which makes getting an abortion punishable by up to 99 years in prison (pic: Charles Edward Miller)

Six states have passed legislation that directly challenge Roe v Wade, and six others have passed trigger laws, which would automatically ban abortion if the Supreme Court struck down Roe v Wade.

Last Monday, May 6th, Georgia Governor Brian Kemp signed the Living Infants Fairness and Equality (LIFE) Act which effectively bans abortion. HB 481 makes it a crime for doctors to provide an abortion once a heartbeat has been detected, normally around six weeks of pregnancy -- before most women know they are pregnant.

Georgia law also requires women to visit a clinic twice before they can get an abortion, and limits public and private insurance coverage of abortion, making it unaffordable for low-income women.

In 2019 alone, 21 abortion restrictions laws have been enacted and 28 legislatures have introduced bills banning abortion in some form.

Federal & State
Under the 1973 Roe ruling, states were the right to regulate the practice of abortion in the third trimester of pregnancy (seven to nine months). 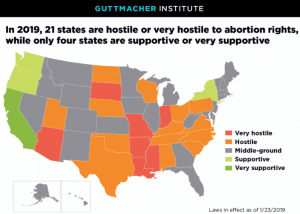 In a subsequent 1992 ruling, Planned Parenthood v. Casey, the Court rejected Roe's trimester framework while affirming its central holding that a woman has a right to abortion until fetal viability.

Although the fundamental legality of abortions under Roe remains intact, many states have passed laws to restrict late-term abortions, implement mandatory waiting periods, require parental notification for minors, and limit public funding of abortion providers, among other acts.

29 million, or 43%, of American women of reproductive age live in a state considered either hostile (14) or very hostile (7) to abortion rights.

Only one state, California, is rated as very supportive of abortion rights, and three, Washington, Oregon and New York, supportive.

In his first year of office, President Trump wasted no time in his attempts to hinder the reproductive rights of women through a series of policy, executive orders and appointments, most significant of which was Bret Kavanaugh to the US Supreme Court -- giving conservatives on the high court a 5-4 conservative majority.

Last Friday, May 10th, a federal judge struck down Kentucky's six-week abortion ban. Kentucky Governor Matt Bevin, a Republican, vowed to appeal ... all the way to the Supreme Court.

Learn more about the laws in your state and what you can do to protect a woman's reproductive rights!
Planned Parenthood, NARAL Pro-Choice America, Center for Reproductive Rights, The Guttmacher Institute