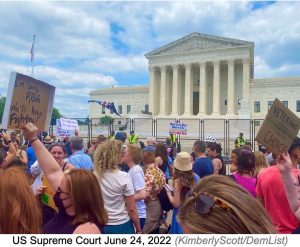 The stunning reversal of a woman's right to choose abortion, which has been the constitutional rule of law for almost 50 years, turned the authority to implement abortion laws over to individual states.

Amid a national outrage and ongoing protests across the country, at least fourteen states, emboldened by their new powers, have enacted laws banning or restricting abortion. A dozen more are battling it out in lower courts.

The "no" vote opposing the amendment garnered an amazing 58.9% and galvanized more than 900,000 Kansans to show up at the polls, the biggest turnout for a primary election in the state’s history. 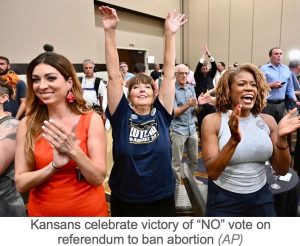 It was an astounding victory for Democrats and abortion rights advocates in one of the country's more conservative states, which Donald Trump won by 15% in 2020.

The Kansas win was a game-changer for Democrats going into the midterms as proof that the issue can motivate voters in the general election and provided hope for maintaining or restoring the right to an abortion in other red states via ballot initiatives.

As Democratic Congressional Campaign Committee (DCCC) Chairman Sean Patrick Maloney (D-NY) said at the time, “Kansas is the earthquake that is going to rattle every assumption about what is going to happen this fall.”

Just weeks after the Kansas referendum, Democrat Pat Ryan won the August 23rd special election in New York's 19th Congressional District. The battleground seat, which slightly favored the GOP, was closely watched for its reflection of the national political climate, with Democrats turning out in disproportionately high numbers to elect Ryan, who ran on preserving abortion rights. 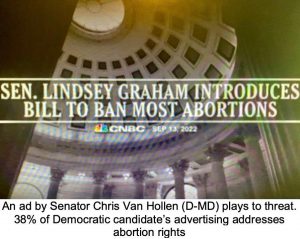 Roevember
Republicans, in the meantime, have tried to thread a delicate balance between their long-saught victory in reversing Roe, and the backlash to the court's decision, particularly among independents and traditional Republican women voters.

Members of their party leadership, however, are working against them. Trump, who still has a significant hold on dedicated GOP voters, fed the frenzy in the primaries by boosting pro-life ultra-right conservatives to nomination in multiple battleground states where moderate pro-choice Democrats are now favored.

"Graham just lobbed a hand grenade at GOP candidates who already had trouble evading attacks on their positions against reproductive rights." said Democratic strategist Brad Bannon. "Graham put abortion back on the front burner and made it even more difficult for fellow Republicans to dodge the issue they just do not want to talk about." 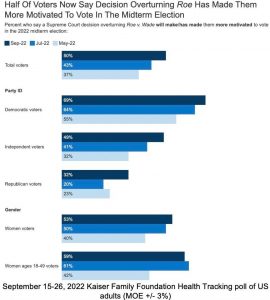 President Joe Biden signed an Executive Order on July 8, doing what was within his limited powers to defend reproductive rights and protect access to safe and legal abortion.

The order expands access to medication abortion and emergency contraception, safeguards patient privacy, and protects the security of reproductive health care services providers and mobile clinics deployed to state borders to offer care for out-of-state abortions. It also bolsters legal services to protect the right to travel out of state for abortions.

Only Congress, however, can overcome the impact of the Supreme Court's decision, by passing federal legislation to codify the rights once enshrined in Roe.

In the spring, the US House passed the Women's Protection Act, which failed in the Senate without the requisite votes to overcome a filibuster.

While Democrats have control of both houses, the reality of those narrow margins has made it impossible to reverse the ills of the Dobbs decision this Congress.

The stakes could not be higher in the midterm elections -- now just three weeks away. In addition to the individual contests in the Senate and House, there are four additional initiatives addressing abortion on the ballot -- in California, Kentucky, Michigan, and Vermont.

At an event in Washington, DC today, President Biden decried the overturning of Roe v. Wade, promising that "if we maintain control of Congress, the first bill I will send to the Congress will be to codify Roe v. Wade. And when Congress passes it, I will sign it in January, 50 years after Roe was first decided the law of the land."

That is if we win. This Roevember, vote.

March 12, 2021 President Joseph Biden signed the American Rescue Plan Act of 2021 into law yesterday, delivering a major victory for both his administration and the American people. Passage of the...