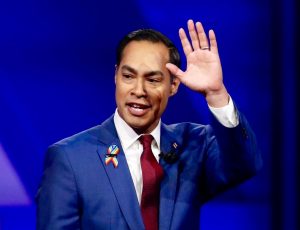 Join former Housing and Urban Development Secretary Julián Castro, Harris County Judge Lina Hidalgo, and a host of Latino leaders for an intergenerational conversation about the rising Latinx electorate and leaders on Wednesday, May 5, 2021 at 2:00 pm ET.

Hidalgo, a Colombian immigrant who came to the US as a teenager, graduated from Stanford University and was pursuing a graduate degree through New York and Harvard universities when she began her run for county judge. In 2018, at age 27, she defeated a two-term incumbent by 19,000 votes, drawing national attention to her underdog victory. 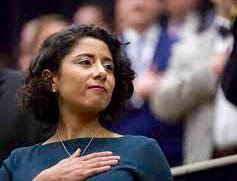 Lina Hidalgo is the first woman and first Hispanic elected Harris County Judge in southeast Texas, the third most populous county in the United States. The nonjudicial position functions as the county's chief executive and oversees a budget of over $4 billion.

Hidalgo was featured on the cover of Time in January 2018 alongside dozens of notable women who were running for office, and in December 2019, was named one of Forbes 30 under 30 in Law and Policy. 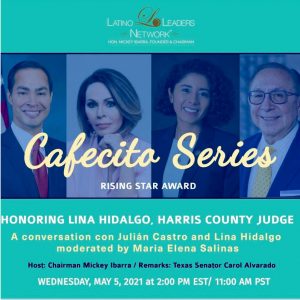 The Cafecito Series is LLN's new digital platform aimed to educate, inspire, and prepare the next generation of leaders through the stories of iconic Latino leaders.

Their goal is to connect seasoned leaders with emerging Latinx and Afro-Latinx leaders "to uplift our community."

The event will take place on Cinco de Mayo, the annual holiday that commemorates the date of the Mexican army's victory over France at the Battle of Puebla in 1862.