DemDaily: The Rights of Felons

DemDaily: The Rights of Felons

The United States is among the most punitive nations in the world when it comes to denying the vote to those who have been convicted of a felony offense.

Felon voting is not federally regulated although some argue that Section 2 of the Voting Rights Act can be applied to felon disenfranchisement - giving Congress the authority to legislate felon voting in federal elections.

Felon voting, however, is not federally regulated. Under the 14th amendment, the US constitution permits states to adopt their own rules for the voting rights of felons. Each state determines which crimes are grounds for disenfranchisement and are not formally bound to restrict them to felonies.

34 states limit felon voting rights. Except for Maine and Vermont, every state prohibits felons from voting while in prison. In addition, 10 states restrict restrict misdemeanor convicts as well. 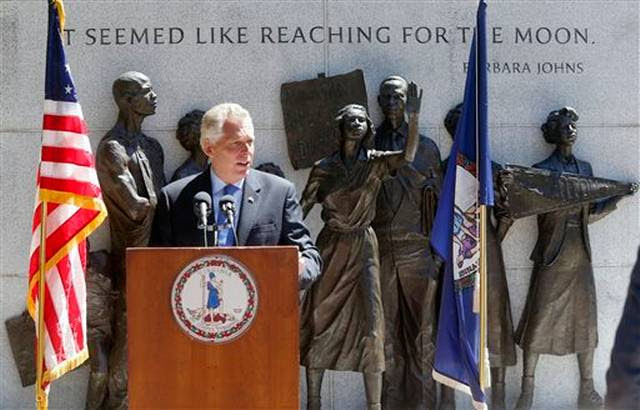 On Monday the felon voting rights movement scored a victory when Virginia Governor Terry McAuliffe announced that he has individually restored voting rights to 13,000 felons.

McAuliffe's declaration comes one month after the Virginia Supreme Court struck down his April executive order, which providing voting clemency to 200,000+ Virginia's felons who had completed their sentences (time incarcerated as well as any parole and/or probation).

Incensed over the inclusion of both violent and nonviolent offenders, and contending that the Governor had overstepped his authority by restoring rights en masse rather than individually, GOP legislative leaders took him to court and won.

McAuliffe, however, turned the tables on the decision via a procedural change that allows him to circumvent the state court's ruling. Since barred from issuing a blanket clemency for all eligible felons, the McAuliffe administration will now grant restored rights on an individual basis (by mail).

"Proud of my friend @GovernorVA [McAuliffe] for continuing to break down barriers to voting."
- Hillary Clinton on Twitter

Because 13,000 of the 200,000 felons already had registered to vote, the high court ordered the state to once again put those names on its list of banned voters. Immediately after the ruling, however, McAuliffe vowed to individually sign orders restoring rights - promising to do the first 13,000 within a week and all 200,000 within two!

Republicans, who have vowed to "review" the issue before the general assembly, claim the move is merely an attempt to add likely Democratic voters to the rolls before the November election - when his close friend Hillary Clinton will be on the ballot.

"I personally believe in the power of second chances and in the dignity and worth of every single human being. These individuals are gainfully employed. They send their children and their grandhchildren to schools. They shop at our grocery stores and they pay taxes. And I am not content to condemn them for eternity as inferior, second-class citizens." -- Virginia Governor Terry McAuliffe