This year has seen a sweeping number of laws passed in Republican legislatures across the country to restrict the freedom to vote.

According to the Brennan Center for Justice, another 61 bills with restrictive provisions are moving through 18 state legislatures, 31 of which have passed at least one chamber. All told, lawmakers have introduced at least 389 restrictive bills in 48 states in the 2021 legislative sessions. 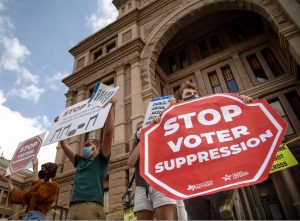 One of the highest-profile battles is in Texas where, in a "dark-of-night" vote in the early hours of May 30th, the Texas Senate passed one of the most far-reaching voter restriction laws in the country.

Called "Jim Crow 2.0" by one Democratic State Senator who represents a majority-minority district, the legislation would ban drive-through voting and 24-hour voting, and would prohibit election officials from sending absentee ballots to all voters, even if requested. Partisan poll watchers would be given more authority, election officials would face harsh penalties for violating the law, and greater limits are placed on voters with disabilities.

In a late Sunday night vote on the bill in the State House, however, Democrats staged a dramatic walkout, leaving the chamber roughly 14 members short of the required 100-member quorum before the midnight deadline for close of the legislative session. Republicans, led by Governor Greg Abbott, have pledged to return in a special session to pass the legislation.

Going into the 2022 midterms and the decennial redistricting process, Americans are facing an unprecedented assault on our democracy.

However, The For the People Act, passed by the US House on March 3, 2021, and now awaiting action in the US Senate, would expand voting rights and mitigate some, but not all, of the voter suppression provisions passed in the states. 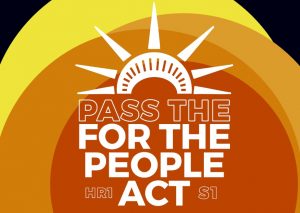 The Act would force states to offer at least 15 days of early voting, universal access to mail-in voting, same-day registration for federal races, and stop states from purging people from voting rolls.

Senate Majority Leader Chuck Schumer (D-NY) has promised to bring S.1, the Senate version, to the floor before the end of the month.

Without the support of all 50 Democrats and ten Republicans to break a filibuster, however, it will be defeated in the upper chamber.

One Democrat, West Virginia Senator Joe Manchin, has already announced he will not vote for the legislation, citing it as too "partisan" -- effectively killing its chances, in its current form, of passage.

August 15, 2022  In the first-ever search of a former US president’s home, FBI officials seized 27 boxes from Mar-a-Lago last Monday, including classified documents and sensitive national security...