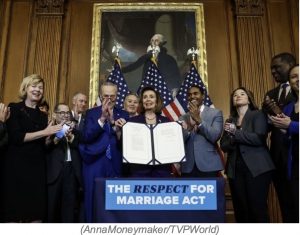 The US House of Representatives on Thursday passed the Respect for Marriage Act, enshrining federal protection for same-sex and interracial marriages.

The legislation, which has gone to President Joe Biden's desk for signature, passed 258 to 169, with 39 Republicans joining a unanimous Democratic caucus that applauded loudly as Speaker Nancy Pelosi (CA) gaveled in the bill's passage.

"Just as I began my career fighting for LGBTQ communities, I am overjoyed that one of the final bills I will sign as Speaker will be the Respect for Marriage Act: ensuring the federal government will never again stand in the way of marrying the person you love,” said Pelosi. 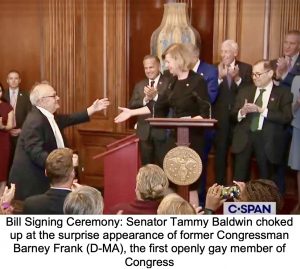 Senator Tammy Baldwin (D-WI), the first openly gay person elected to the US Senate, led its passage in the Senate 61 to 36 on November 30th. She was joined by Democrats Kirsten Sinema (AZ) and Diane Feinstein (CA), and Republicans Susan Collins (ME), Rob Portman (OH) and Thom Tillis (NC) in lobbying for the Act. In the end, said Baldwin, they “defied political gravity” with 12 Republicans joining all the Democrats in voting for the bill.

In response to Senate GOP demands, however, the Respect for Marriage Act does not impact provisions from a 1993 religious freedom law that prohibits the government from placing a substantial burden on "a person's exercise of religion." That means that non-profit religious groups, while still retaining their tax status, would not have to perform marriage services or "provide goods or services to formally recognize or celebrate a marriage."

The push for federal legislation to protect marriage equality escalated rapidly after the US Supreme Court's decision last June in Dobbs v. Jackson, which overturned its landmark 1972 Roe v. Wade decision and the federal right to an abortion. 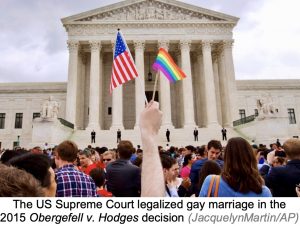 Justice Clarence Thomas, in his concurring opinion, stated that the same legal rationale could be applied to overturn other major cases, explicitly calling on the court to revisit the 2015 Obergefell v. Hodges decision that cleared the way for legal same-sex marriage nationwide.

In 303 Creative LLC v. Elenis, the plaintiff argues a state law prohibiting discrimination on the basis of sexual orientation violates her free speech rights by forcing her to express a message that conflicts with her closely held religious beliefs. A decision will be rendered at the end of the Court's term this summer. 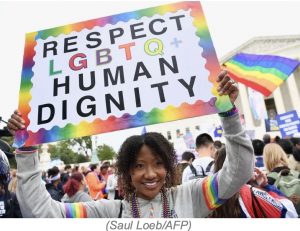 "After the uncertainty caused by the Supreme Court’s Dobbs decision, Congress has restored a measure of security to millions of marriages and families," said President Biden in a statement. "They have also provided hope and dignity to millions of young people across this country who can grow up knowing that their government will recognize and respect the families they build."

May 20, 2022  To remind us to laugh. On this week’s state primaries “Idaho, Kentucky, North Carolina, Oregon and Pennsylvania all held primaries, which, of course, is news to the vast...

February 24, 2021 This is a busy week for advancing the confirmation of President Biden’s Cabinet, with the approval of two members and hearings for four nominees. With the confirmations...